'I'm a victim of abuse of state resources' - Khomotso Phahlane 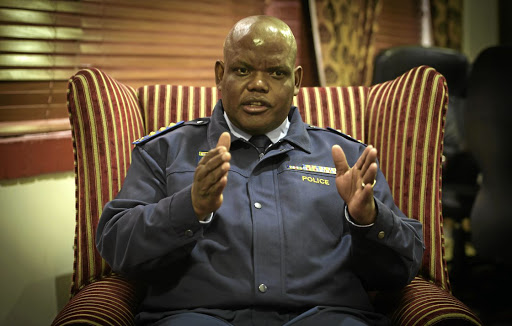 Former acting national police commissioner Khomotso Phahlane claims there is a sinister agenda by those misusing government resources to ensure that he does not become the top cop by bringing up trumped-up charges. /Gallo Images

Phahlane was initially hailed by many as one of the few police commissioners without any cloud hanging over their heads.

It seemed inevitable that he would be appointed as Wachthuis's number one on a permanent basis.

Phahlane, a career cop with over 30 years in the service, was appointed to the position in October 2015, stepping into the office vacated by the suspension of Riah Phiyega.

"I have no criminal record, no pending disciplinary hearing or hidden agenda. I have my top secret security clearance and the experience and qualifications to lead the organisation in the interest of South Africa," Phahlane told Independent Media following the announcement of his appointment.

Barely a week after his appointment, the #FeesMustFall protests spread like wildfire across South African universities.

Khomotso Phahlane believes the recent corruption charges against him are aimed at creating a cloud over his head.
News
3 years ago

The student protests over tuition fees and financial exclusion, which were often violent, needed police to be deployed on campuses across the country.

When Sowetan sat down with Phahlane for an interview recently, he referred to the #FeesMustFall protests as his "baptism of fire".

The handling of the student protests by the men and women in blue still ranks among Phahlane's proudest moments as the top cop.

"I am proud of what we [SAPS] were able to deliver [in handling the #FeesMustFall protests] without any loss of life... it was a baptism of fire for me," he said.

However, just under a year into the job, Phahlane faced questions about how he had managed to afford a house apparently worth about R8m in an upmarket estate in Pretoria.

Shortly thereafter, he also faced a storm of accusations of allegedly having taken kickbacks to secure tenders for a private company during his stint as head of the police's forensics division.

It was alleged a company that did business with SAPS had installed an R80,000 sound system in Phahlane's house in return for tenders, something he vehemently denied, stating he had personally paid for the sound system.

These allegations were central to investigations by the Independent Police Investigative Directorate, which saw Phahlane face a case of corruption in the Commercial Crimes Court in Pretoria.

In a scathing attack on the Independent Police Investigative Directorate (Ipid), former acting police commissioner Khomotso said his arrest was a set ...
News
3 years ago

The directorate alleged Phahlane had received vehicles as kickbacks for contracts. Phahlane insisted the vehicles were sponsorships, not kickbacks.

Although the initial case was later withdrawn in June but could be reinstated any moment, Phahlane maintains his innocence.

"I went to court where they were alleging that the two vehicles I received as sponsorships were a gratification, were kickbacks but they couldn't prove that," Phahlane said.

Phahlane said his house was worth R3m but the figure had been inflated by those driving a negative narrative about him.

There were also allegations against Phahlane and his wife, Beauty, owning more than half a dozen expensive cars.

He claimed the number of cars he owned had been "deliberately inflated" to seven to create a narrative that he was corrupt.

"I don't even have a BMW i8, the car I was driving when I was attacked [was from] BMW SA, which I had on test drive.

He denied that he had ever owned seven cars.

"Between my wife and I, we have three cars. I have a Range Rover, a Mercedes-Benz and an Amarok and there are two cars that belong to my daughters," Phahlane said.

However, as a result of the directorate cases and the storm it created over Phahlane, he was suspended from his position in June 2017 by former police minister Fikile Mbalula.

The Independent Police Investigative Directorate (Ipid) arrested a lieutenant-general and a major-general on fraud and corruption allegations.
News
3 years ago

He started the month by appearing in the Commercial Crimes Court in Johannesburg and was granted R20,000 bail over fresh charges of fraud and corruption relating to an R80m blue light tender.

He insisted that the case related to orders made last year, which related to a period when he was no longer in the SAPS.

"They're baseless, unfounded allegations against me, without any merit and they should never stand in any reputable court," Phahlane said.

But Phahlane didn't want to be drawn into mentioning the people behind a campaign to smear his name.

He said the litany of allegations did not cause him sleepless nights.

"Why would I have sleepless nights about something that I have nothing to do with?"

He feels he's a victim of abuse of power where state resources are being used to settle personal agendas.

Phahlane said those who are behind the litany of allegations have "succeeded" in making sure he didn't get appointed as the national police commissioner.

He said being at home meant getting to spend more time with family, something he was enjoying as the 32 years in service meant little family time.

Phahlane is a soft-spoken man, his handshake is even softer. However, he was firm in refusing to pose for pictures after our interview.

"You already have too many pictures of me," he said.