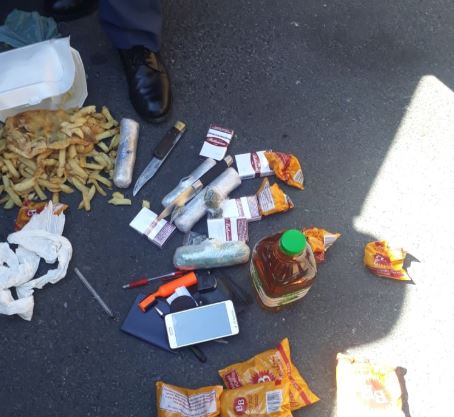 Constable found in possession of 329 grams of dagga, 2 knives, bottle of whiskey, cigarettes, tobacco, & various other forms of contraband which were to be smuggled in prisoners.
Image: SA Police Service via Twitter

A 43-year-old police constable has been arrested after being found in possession of contraband goods which he was apparently planning to smuggle to prisoners.

The constable was arrested during an intelligence-driven operation conducted at the Bellville Magistrate’s Court on Friday in conjunction with National Intervention Unit members.

“Members received information and acted swiftly and arrested the suspect after he was found in possession of 329 grams of dagga‚ two knives‚ bottle of whiskey‚ cigarettes‚ tobacco‚ and various other forms of contraband which were to be smuggled to prisoners‚” Western Cape police said.

Two Cape Town detectives tracked down robbers who had stolen R45‚000‚ recovered the cash ... and kept it.
News
3 years ago

The suspect is expected to make a court appearance at the Bellville Magistrate’s Court on Monday to face a charge of corruption. Western Cape provincial commissioner Lieutenant-General Khombinkosi Jula commended police for the constable’s arrest.

“It is expected of members of the SAPS to be beyond reproach at all times and that corruption has no place in SAPS‚ and we will make every endeavour to ensure that perpetrators within our ranks are prosecuted‚” Jula said.