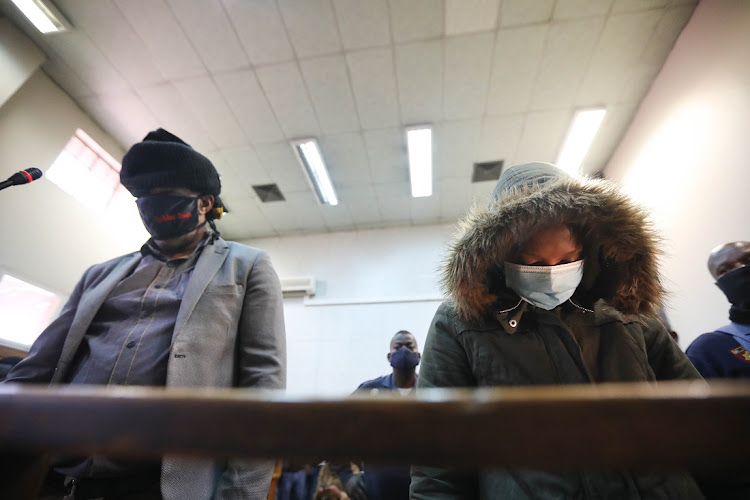 A policeman and a policewoman on Monday appeared in court accused of the premeditated murder of 16-year-old Nateniël Julies of Eldorado Park.

Scorpion Simon Ndyalvane and Caylene Whiteboy, attached to the Eldorado Park crime prevention unit, made a brief appearance in the Protea magistrate’s court in Soweto on Monday afternoon.

Ndyalvane, a tall man, had his entire face covered with a beanie and black mask. He was dressed in brown pants, brown shoes and grey formal jacket.

The petite Whiteboy was dressed in a green winter jacket with a fur hoodie.

As the sounds of camera shutters went off, the duo had their heads hung low.

Julies, who had Down syndrome, was killed on Wednesday evening.

The pair is charged with premeditated murder, defeating the ends of justice, discharging a firearm in a public space and unlawful possession of ammunition.

Before proceedings got under way, EFF supporters were refused access to the courtroom. They hurled insults at police officers who guarded the door.

“Shoot me. Who are you? Shoot me,” the supporters were heard shouting at officers.

The courtroom was lined with police officers. Community members clad in #JusticeForNateniël T-shirts filled most of the benches.

The parents of Julies were not in attendance. His uncle, Cyril Brown, said the family was glad the suspects in his nephew's death had been apprehended. “We just hope and pray there are no glitches in the case, that justice will take its course.”

The matter has been postponed to September 10 for the accused to obtain legal representation. The two remain in custody.

*Note: Nateniël Julies' name has been amended in accordance with his birth certificate.