Mosimane on Middendorp: ‘I think he deserves to win his first league title’ 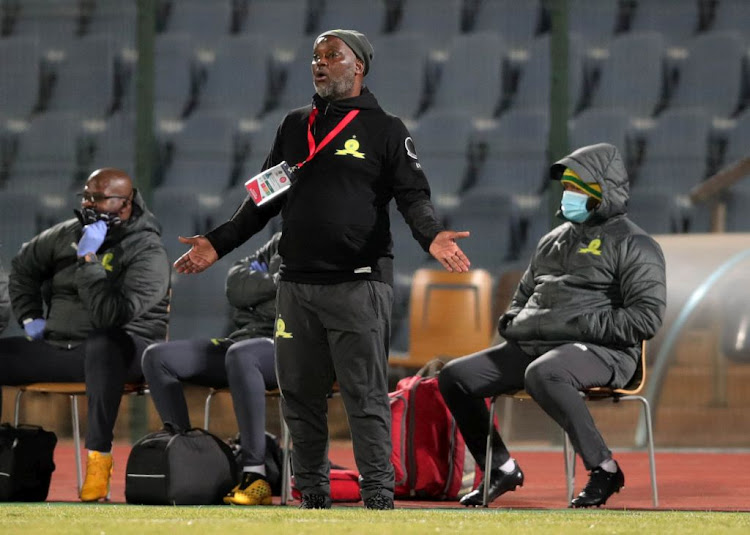 The Brazilians and Amakhosi are equal on points on the Absa Premiership standings with one round of matches remaining on Saturday afternoon and Mosimane congratulated Middendorp for the work he has done at Chiefs.

“We are both professionals and if he wins it, he deserves it because he has been leading for the most part of the season. I think he deserves to win his first league title, it’s fair enough,” said Mosimane who is chasing La Decima – Sundowns’ 10th PSL title – and a rare treble this season.

“For me personally, it is to congratulate coach Middendorp for the work done and I hope I am not misunderstood by talking about the title. The work done for the year, I think he did very well.

“The team sort of got a shock therapy and he put his methodology, philosophy and if anybody wants to say it’s not the best philosophy, why are they sitting on top of the log?”

Mosimane also reflected on his endless mind games with Middendorp during the season and said he had hyped the league.

“We had our jabs, me and him, right through the year but it’s like in boxing. When boxers go into a fight, before the fight there is always talk, there is the media hype, the conversations and I think he understand because we are all professionals.

“Time is done for those things and whoever wins we will shake hands and he knows that I will shake hands with him. He was a professional and after the match against Chiefs [Sundowns’ 1-0 win on August 27] he waited for me to shake my hand and said congratulations.

“We hyped the league and I think it was hyped up enough to where it is now.”

Sundowns coach Mosimane: ‘You have to give it to Chiefs – they have won nothing for 5 or 6 years’

Mamelodi Sundowns coach Pitso Mosimane says securing a Caf Champions League spot for the seventh successive season is more important to him than ...
Sport
1 year ago

Going into Sundowns’ last game against Black Leopards at Dobsonville Stadium, Mosimane reiterated it is not in his team’s hands to win the championship.

“It’s in Chiefs’ hands because they have the goals, they are top of the log and we are chasing. We have to win our game against Black Leopards and if we can score more why not?

“We ran our race for the year and we have done we well to be honest. It’ll be nice to win the league and this one will be special because it’s the 50th anniversary of the club.

“It will be La Decima and you are coming from 13 points behind. We want to win the treble, it will be very big because we never had a chance.

“What is making the last day of the season exciting is that everybody needs a point – Chiefs, Baroka and Leopards need a point.

Mosimane on rivals Chiefs: 'We are competing with a team that didn’t even play top eight'

Mamelodi Sundowns coach Pitso Mosimane says they will rely on their experience of playing in high stakes matches during their clash against Black ...
Sport
1 year ago

Sundowns coach Mosimane not happy with Dobsonville Stadium pitch: 'we can’t even pass the ball'

The state of the pitch at Dobsonville Stadium has irked outspoken Mamelodi Sundowns coach Pitso Mosimane so much that he has called for the Soweto ...
Sport
1 year ago

Downplaying winning what would be the club’s 10th league title, Mamelodi Sundowns coach Pitso is already satisfied with his team’s achievements this ...
Sport
1 year ago
Next Article