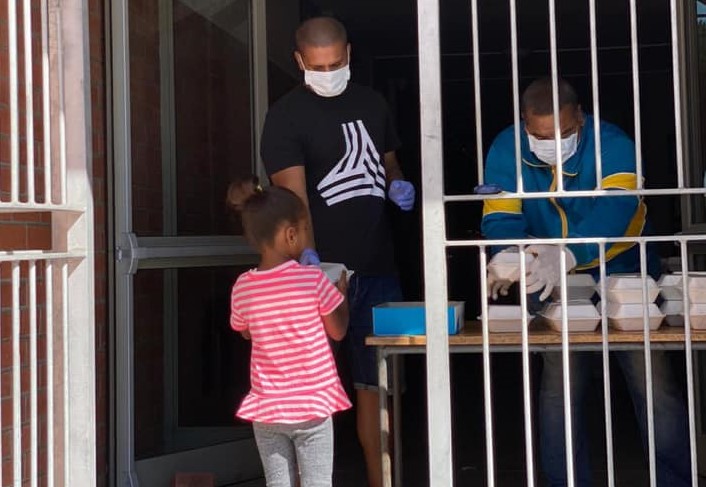 A girl receives a meal at her school on the first day of the Western Cape education department's R18m Covid-19 feeding scheme on April 8 2020.
Image: Facebook/Alan Winde

Chairperson of the portfolio committee on basic education Bongiwe Mbinqo-Gigaba raised concerns about the province deviating from a decision taken by the national government not to run feeding schemes during the lockdown — and possibly putting lives in danger by doing so.

Western Cape education MEC Debbie Schäfer told SowetanLIVE's sister publication TimesLIVE that the department had not instituted a resumption of the national school nutrition programme but they were rather undertaking an emergency humanitarian effort which was part of the provincial social development’s overall plan to feed those in need.

“It makes complete sense to use school facilities and infrastructure to help with this, as we know who needs it and have the ability to contact them. Schools are not 'open' just because we are using them to make and distribute food,” she said.

Schäfer said despite a few days’ notice, they had managed to feed almost 100,000 children, thanks to the commitment of staff members, teachers and volunteers.

“I have been overwhelmed by the support we have received from the vast majority of our schools. Staff and volunteers have gone the extra mile to provide meals this week, and I offer them my sincere thanks. It is clear that they really care about our province’s children,” she said.

The school feeding scheme programme feeds about 483,000 pupils in the province.

She said they had put prevention measures in place, as per the NICD guidelines, as they understand that school staff and volunteers are scared of Covid-19 — as is everyone.

Agriculture minister Thoko Didiza on Monday said a R1.2bn allocation to assist farmers grappling with the impact of the Covid-19 pandemic was to ...
News
2 years ago

“This is a difficult task, but it is an essential one. We cannot simply let our children to go hungry,” said Schäfer.

Among the measures was having sufficient adult supervision available to make sure pupils follow all the safety protocols and ensuring an orderly queuing system, preferably in a staggered manner to reduce the number of pupils arriving at the same time.

Pupils also bring their own food containers from home, which are not touched by the staff and volunteers who ensure that no more than 50 children are at the feeding venues at the same time.

Schäfer said they were providing soap and water for pupils to wash their hands, or hand sanitiser, and that pupils did not eat at schools but went home after collecting their food.

Police have been made aware of the plans, and have agreed to patrol the areas around the schools when meals are being served, said Schäfer.

In a statement, Mbinqo-Gigaba said she was concerned about media reports in which Schäfer and premier Alan Winde were quoted as saying they would continue with the national food nutrition programme during the lockdown.

Mbinqo-Gigaba said she had been receiving calls regarding the matter as members of the public raised concerns regarding social distancing and mixed messages in a province that has so far recorded the second-highest number of Covid-19 infections.

“As a caring nation that understands the plight of the poor, we have the greatest of empathy with those less fortunate. But at the same time, the health of our nation is also at stake and therefore assisting families in need, as part of the comprehensive country’s plan, is now not the responsibility of the education department,” she said.

“We do not want to expose our communities to the possibilities of contracting the virus. We cannot be telling people to stay safe and stay at home and at the same time we are encouraging them to collect food at school.

“We are sending out conflicting messages to our people in a time when we should be united in putting the health and interests of our learners and communities first. We know, in underprivileged communities if the people are made aware of food being distributed, they will go and queue, thereby exposing the adults or children who collect the food,” she said.

Mbinqo-Gigaba said she would write to Motshekga to request further information about this deviation from the agreed plan as well as on whether people could be allowed to enter school premises during a national lockdown, risking exposing many to the virus.

The Western Cape government announced last week that as part of emergency food relief programmes across the province it had set aside R18m for the department of education to initiate a special school feeding programme from April 8 until April 20, which would target the 485,000 existing school feeding scheme beneficiaries with one takeaway meal a day at about 1,000 schools.

Winde said the provincial department of social development had reactivated the early childhood development (ECD) feeding schemes at the majority of the 1,100 ECDs funded by the department and this would feed up to 80,000 children a day once fully up and running.

Last month, basic education minister Angie Motshekga said the department of basic education would abandon its school nutrition programme — which feeds close to 10-million pupils — during the national lockdown as the feeding scheme depended on teachers, who weren't at work, and schools, which were closed.

To this end, Motshekga said she had handed over the school nutrition function to social development minister Lindiwe Zulu to run, if she could.

The ANC has thrown its weight behind president Cyril Ramaphosa’s suspension of minister Stella Ndabeni-Abrahams and has called on all its deployees ...
News
2 years ago
Next Article