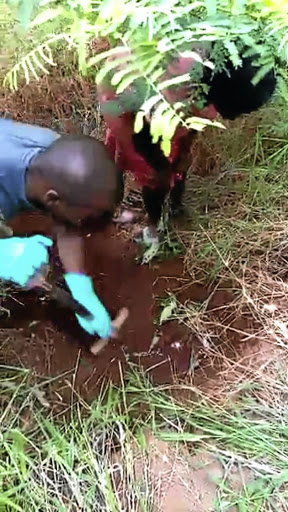 A 21-year-old mother points to a shallow grave where she had buried her two-week-old baby boy.

A 21-year-old mother is expected to appear in court for the murder of her two-week-old baby boy who was found buried in a shallow grave.

Police spokesperson Brig Motlafela Mojapelo said the incident happened in Ha-Mutsa Tshirangadzi village in Levubu outside Thohoyandou and that the mother will appear in the Vuwani magistrate's court today.

"The baby's mother was rescued by police from the hands of angry local community members. This after the woman was allegedly seen on Sunday carrying her baby boy, purportedly taking him to the local clinic. She was again seen the next day with the same baby, but on Tuesday the baby was nowhere to be seen.

"Community members then became suspicious that something bad might have happened to the baby," he said.

Mojapelo added that on Wednesday the woman was then confronted by the same community members who threatened her with violence, asking her where the baby was.

A judge has recused himself from the murder trial of slain student Palesa Madiba as he's related to the family of the deceased.
News
1 year ago

The mother's neighbour Noria Mashova told Sowetan she was shocked by the mother's actions.

"We got worried when we could no longer see the baby with her and she didn't give any satisfactory answer on his whereabouts. She later confessed that she buried the baby, but didn't say why she killed him or what she used to kill him," she said.

She said the baby had a bloodied face.

Mashova said the mother, who is a Zimbabwean national, was renting a room next to her place.

"I would have expected her to come and talk to me about her problems like she did before. When the baby was born two weeks ago, she came to me and said she didn't have clothes for her newborn, I then donated. I even told her not to hesitate to come to me if she needed help because her situation was terrible," she said.

In a video clip Sowetan has seen, the mother is seen pointing out the shallow grave to the police.

A father in Limpopo has been arrested for killing his four-year-old son and burying his tiny body in a shallow grave in the backyard of their home ...
News
1 year ago

Dressed in a red T-shirt and white-dotted red skirt, the mother stood next to the grave which was covered with grass while a police officer was exhuming the baby's body which was found wrapped in a white towel.

Mojapelo said the mother had earlier told the police that the baby died and she threw him into the local river.

"The woman initially told them the child became sick and she decided to take him to the clinic and later to the local hospital. She alleged the baby subsequently died on Monday and that she threw his body into the local river.

"Members of the South African Police Search and Rescue Unit were as a result summoned to the scene and on arrival, they immediately commenced with the search and rescue mission.

"After the body could not be found in the river, the police continued with investigations which led them to a spot where the body was found buried in a shallow grave," he said.

MEC for social development Nkakareng Rakgoale has condemned the incident: "We do not know the exact circumstances behind this incident, but we need to put an end to this senseless killings of children of all ages and for whatever reason."

Man in hospital after mob beating for 'killing' his son

The 35-year-old father from Ngwanamatlang village in Jane Furse, Limpopo, is expected to appear in court soon.
News
1 year ago

A Soweto man who allegedly killed his girlfriend and hid her body under the bed has three charges of attempted murder pending against him.
News
1 year ago

The mother of a woman whose decomposing body was found at her boyfriend's house on Sunday says she pleaded with her daughter to leave the man.
News
1 year ago
Next Article