Man in hospital after mob beating for 'killing' his son 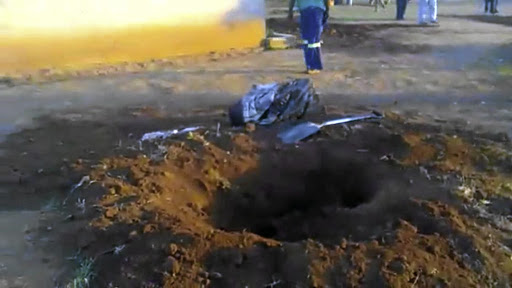 A screengrab of a video showing the Limpopo father being forced by community members to exhume the body of his child that he had buried in his backyard.

The father who was forced to exhume the body of his four-year-old son after he had allegedly suffocated him with a blanket and buried him in a shallow grave in the yard, is still recovering in hospital after he was apparently beaten up by community members.

The 35-year-old father from Ngwanamatlang village in Jane Furse, Limpopo, is expected to appear in court soon.

The father, a Lesotho national, was apparently caught by community members after they suspected foul play due to a stench coming from his rented home on Sunday.

Provincial police spokesperson Brig Motlafela Mojapelo said: "According to the information, his [the boy's] father... allegedly suffocated him with a blanket. He dug a shallow grave and buried him.

"Community members saw the suspicious grave and question the suspect, who tried to run away from the community but he was traced and arrested. He was brought back to the scene, where he was forced to dig up the shallow grave and the decomposed body of his son was found."

He said police were called to the scene. Mojapelo said the father was seriously injured after the beating by community members and he was under police guard in hospital.

A community member who wished to remain anonymous said the man was captured after neighbours raised concerns about strange activities in his yard.

A father in Limpopo has been arrested for killing his four-year-old son and burying his tiny body in a shallow grave in the backyard of their home ...
News
2 years ago

"On Sunday, a group of community members were frog-marching the suspect in the streets, demanding that he show them where the child was," he said.

"When I met the group he was still denying that anything had happened to his son, but after I unleashed a few fists on his body, he confessed [to killing the boy] and pointed out the shallow grave."

The community member said it was the first time he had seen the suspect on the property. "He is renting a room in this village. I know the owner of the property where the incident happened. He [the owner] is in jail," he said.

The incident in which the suspect exhumed the body of his son, who police said he had fetched from his mother in Gauteng two weeks ago, was captured on video.

In the video, a man wearing a green T-shirt and blue trousers is seen surrounded by angry community members demanding the boy's body.

The man is seen digging in the yard with a spade and then reaching for a mealie meal bag covered in a blanket in which there is the body of the boy.

Some community members can be heard saying that the man had confessed to killing his son and burying him in a shallow grave in the backyard.

"He said he didn't know what got to him when he killed his son," one man can be heard saying.

Another can be heard saying that the body had been scalded with boiling water.

MEC for social development Nkakareng Rakgoale said she was worried about the continuing incidents of the killing of women and children.

"As a department which has the interests of children at heart, we condemn with the strongest possible terms the killing of this four-year-old," she said.

"Social workers have been deployed to the area to offer psychosocial support to the family and other people who are affected by this incident.

"We hope the law will take its course to ensure that we send a strong message to parents who are abusing their children," Rakgoale said.

A Bloemfontein father has been arrested after he allegedly assaulted and strangled his 11-year-old daughter.
News
2 years ago

She faces a charge of murder and attempting to defeat the ends of justice.
News
2 years ago

The mother of a man who attacked seven children with a panga, killing one of them, because they allegedly fed him rotten meat, wants her mentally ill ...
News
2 years ago
Next Article