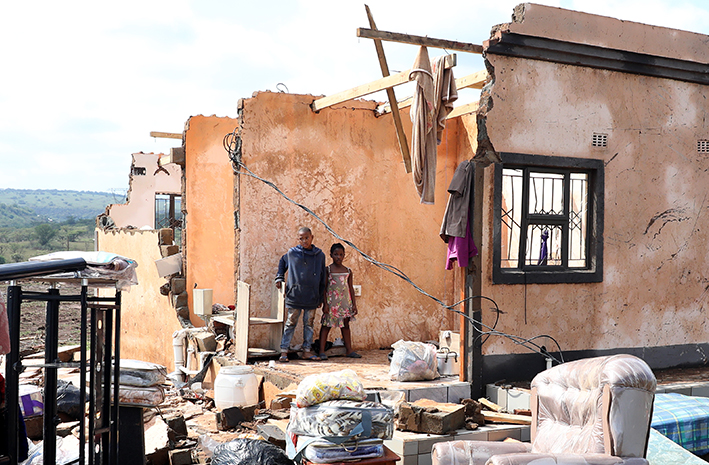 Bandile and Asanda Xulu outside their grandmother's home in eMpolweni, near Pietermaritzburg, which collapsed after being hit by a tornado in November.
Image: Sandile Ndlovu

At least 44 people were killed, 193 injured and 30,000 affected by storms which wreaked havoc in KwaZulu-Natal between November 2019 and January this year.

This was revealed by the departments of co-operative governance and traditional affairs (Cogta) and basic education during a joint media briefing in the Harry Gwala district municipality on Thursday.

Addressing the media at the Umzimkhulu council chambers, Cogta minister Nkosazana Dlamini-Zuma said 445 incidents were reported to disaster management centres in the province from November 2019 to January 9, 2020.

“We have established through evidence on the ground that the province of KwaZulu-Natal has, since November 2019, experienced a number of extreme weather-related incidents including fatal thunderstorms, heavy rainfall, and strong winds.

“The latest incidents occurred during the festive season, as many were preparing to celebrate Christmas and usher in the New Year,” she said.

Dlamini-Zuma, with basic education minister Angie Motshekga and Premier Sihle Zikalala, spent most of Thursday morning visiting some of the 15 schools in Harry Gwala district that were damaged by storms.

Ministers Nkosazana Dlamini Zuma and Angie Motshekga, accompanied by KZN Premier, Sihle Zikalala and MEC’s outlined measures to ensure that as the school term commences next week, learners are able to commence their studies in an environment conducive for learning and teaching. pic.twitter.com/so3C5UBMtS

Dlamini-Zuma said 99 schools in KZN had been damaged by storms since November.

“More than 3,148 houses were destroyed and 5,632 houses were damaged. Close to 30,000 people were affected. To date, 44 fatalities were confirmed and recorded, and 193 injuries recorded.”

She said Harry Gwala was one of the severely affected districts in the province.

“Scores of families, particularly in this region, were in the eye of the storm. It was a dark and miserable Christmas as Mother Nature wreaked havoc, leaving scores of families homeless.

“Many had to endure cold nights after their belongings, including foodstuffs, were destroyed. Roofs were blown away and some of the homes' walls collapsed, while others were flooded.”

She said the human settlements department had responded immediately to disaster-affected victims.

“The department is providing temporary residential accommodation for all affected families.

“Building material will be supplied to families at the cost of R8,000 per household. Sassa (Social Security Agency) has committed to provide groceries to the amount of R750 to the affected families for a period of three months.”

Dlamini-Zuma extended her gratitude to various NGOs and individuals for their efforts in providing emergency assistance to those in distress.

“Our appeal is for these activities to continue,” she concluded.