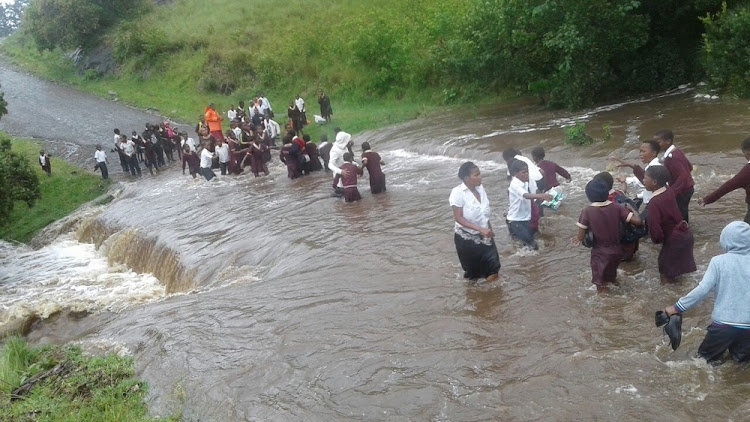 Pupils in northern KZN cross a flooded road on February 20 2018. The provincial department of education has asked schools to send children home in anticipation of bad weather predicted for Thursday afternoon.
Image: SUPPLIED

The KwaZulu-Natal department of education has asked schools to send pupils home after severe storm predictions.

A memorandum issued on Thursday morning and dated November 14 said education head of department Enock Vusumuzi Nzama had issued a directive to schools to send home pupils who are not writing exams.

“Those who are writing must continue with their planned sessions and be released immediately after finishing. Where possible, parents must be informed to collect their children to ensure safe return home.”

Provincial education spokesperson Muzi Mahlambi confirmed the directive was sent to all schools in the province on Thursday morning.

“We are asking all schools to release their pupils because of the weather warning. If the weather doesn't prove to be bad, that's fine, but it is better to act proactively,” he said.

Matriculants are writing economics paper 2 on Thursday morning, while others are writing Zulu, Xhosa, Siswati and Ndebele paper 2 in the afternoon.

The SA Weather Service warned on Wednesday that the worst was not over for the eastern part of the country, including KwaZulu-Natal, with accumulated rainfall expected to exceed 150mm on Thursday and Friday.

Saws said the heavy rain was expected to lead to flooding of roads and settlements, both formal and informal, which may result in some communities being displaced and rendered inaccessible.

“There is a sustained high risk of further severe weather over the eastern half of the country for the next three days, with the possibility of strong winds, hail and heavy downpours.

“KwaZulu-Natal is expected to be the province particularly affected by these extreme conditions. There is an extreme danger to life due to fast-flowing rivers.

“With the high amount of rain that has already been experienced, the risk of flooding is very high in places.”

Saws also warned against the circulation of fake news on social media platforms regarding the weather.

“We urge the public to respond only to weather information sourced from reputable agencies with the mandate to issue and distribute weather-related warnings, such as Saws, as well as national and provincial disaster managers.”

A tornado left a swathe of destruction in New Hanover and Greytown, north of Pietermaritzburg, on November 12 2019. Emergency workers say two people died and 20 others were treated for minor to moderate injuries after the tornado ripped through the Mpolweni settlement near Wartburg.