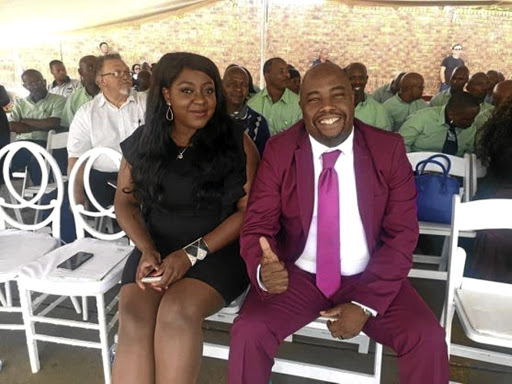 The future of Tshwane mayor Stevens Mokgalapa hangs in the balance.

Calls for his head intensified yesterday after an audio clip of him and member of mayoral committee for roads and transport Sheila Senkubuge allegedly having sex was
circulated on social media.

Moodey confirmed that Mokgalapa's future formed a huge part of the discussions in the meeting.

Moodey said if Mokgalapa and Senkubuge are found guilty, the DA would not hesitate to act on him.

"Once we have gathered all facts from myths, the necessary actions will be taken," said Moodey.

He said he had a discussion with Mokgalapa in which he gave his account and context regarding the clip. He, however, said he could not divulge what they discussed as "that is all part of finding out what the facts are. I'm not at liberty at this stage to disclose the content of the explanations given".

In the audio clip Mokgalapa and Senkubuge could be heard also dissing their colleagues and plotting to fire senior city officials.

Tshwane mayor Stevens Mokgalapa "must fall on his sword and resign" over a leaked audio recording, the ANC demanded on Monday.
News
2 years ago

According to Moodey, in order to contain the damage to the DA brand caused by the audio clip, the investigation would have to "move swiftly" and present their findings as soon as possible "to make sure we give the people of Tshwane the satisfaction that we will deal decisively with this matter".

According to insiders who attended the meeting yesterday it was agreed that in order to not cause panic Mokgalapa should remain in his position at least until a Federal Executive meeting in two weeks.

The two factions of the DA debated whether Mokgalapa should be placed on special leave until the investigation is completed, but ended up agreeing that they should allow the Federal Legal Commission space to investigate the matter and table a report before the FedEx in two weeks.

"All I can say is that the Legal Commission will investigate and present its report. The man remains the mayor," said a DA Tshwane caucus member.

The party on Sunday instituted an investigation into Mokgalapa and Senkubuge following the leaked audio clip which the pair referred to speaker Katlego Mathebe as a "witch" and boasted about taking a BMW X5 from the Tshwane chief of metro police.

It is understood that the scope of the investigation is broad and would look into the authenticity of the clip, its contents and whether the pair had brought the party into disrepute.

The ANC in Tshwane has called on the DA to remove Mokgalapa if he does not offer his resignation.

"The behaviours of the executive mayor and MMC is not exemplary to the youth of SA and employees of the city in particularly. They have caused insidious harm to the city's brand, image, reputation." said Maepa.

Maepa said it was now obvious that Mokgalapa has to vacate his office, saying the alleged sexual encounter took place in government offices.

"He should have known better. When he coughs the whole city catches flue. It's something that must be stopped. In his conscience he must resign or the DA to replace him," said Maepa.

"Mokgalapa's distasteful actions are abhorrent for a person at his level. He has disgraced his party the DA and he should have known better. He has caused untold damage to the DA brand image, not only in Tshwane but across the board."

"Please ask James Selfe. He is the head of the governance unit and we are in government in Tshwane. I have to keep in my lane," said Zille.

The party's interim leader John Steenhuisen could not be reached for a comment.

The DA is investigating Tshwane mayor Stevens Mokgalapa and his member of mayoral committee for roads and transport Sheila Senkubuge after an audio ...
News
2 years ago

Residents commemorating the 34th anniversary of the Mamelodi massacre have agreed to march to mayor Stevens Mokgalapa's office next week to protest ...
News
2 years ago