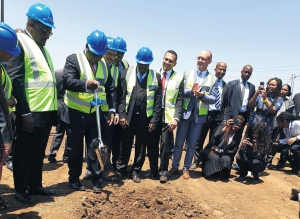 The launch of the multibillion-rand automotive economic zone last week forms part of the Gauteng provincial government's plan of action to boost investment and create a large number of jobs.

Dubbed the Tshwane Special Economic Zone (SEZ), the development would generate a total production impact of R43.8bn during construction. The first phase of Tshwane Automotive SEZ is scheduled to be completed by the end of 2020.

"The special economic zones are crucial policy interventions that boost manufacturing, increase exports and employment, while at the same time linking local suppliers to the value chains of transnational corporations operating in our province," said Makhura.

Special economic zones will be created in each of the five developmental corridors: Tshwane, West Rand, Ekurhuleni, Sedibeng and Johannesburg.

In Sedibeng and West Rand the aim will be on boosting urban agriculture, food and beverages, agro-processing and tourism.

Beyond this automotive hub, Gauteng government is also working on:

. Development of the Science and High-Tech SEZ In Ekandustria;

. Accelerated implementation of OR Tambo SEZ;

. Revitalisation of the Babelegi Industrial Park;

. Revitalisation of GaRankuwa Industrial Park; and

. Establishment of the Township Enterprise Hubs.

Speaking at the official unveiling of the Tshwane SEZ last week Tuesday, Makhura said that talks about the Tshwane SEZ began after President Cyril Ramaphosa delivered his state of the nation address in February.

Speaking at the official unveiling of the Tshwane SEZ last Tuesday, Makhura said that talks about the Tshwane SEZ began after President Cyril Ramaphosa's State of the Nation Address in February.

The launch at Ford Motor Company SA's factory in Silverton, Pretoria, was attended by the president, trade, industry & competition minister Ebrahim Patel and Tshwane mayor Stevens Mokgalapa, among other dignitaries.

Makhura told a packed marquee that he had a meeting with trade & industry director-general Lionel October in Cape Town to discuss how to fast-track investments slowed down by bureaucracy. Makhura later also met with Ford Motor Company managing director Neale Hill and City of Tshwane mayor Stevens Mokgalapa to also discuss how the investment could be implemented as soon as possible.

"This we did because for years we have been putting a great deal of effort to reindustrialise our province under the programme of transformation, modernisation and reindustrialisation.

He said the City of Tshwane has set a target of R10 billion in investment for the current administration.

"This development (Tshwane SEZ) contributes to this (R10 billion target) in order to create much-needed jobs and grow our local economy.

"With the SEZ operating optimally, I am looking forward to exceeding this target significantly so residents can enjoy the full benefits of economic activities that create jobs and improve their quality of life," he said.