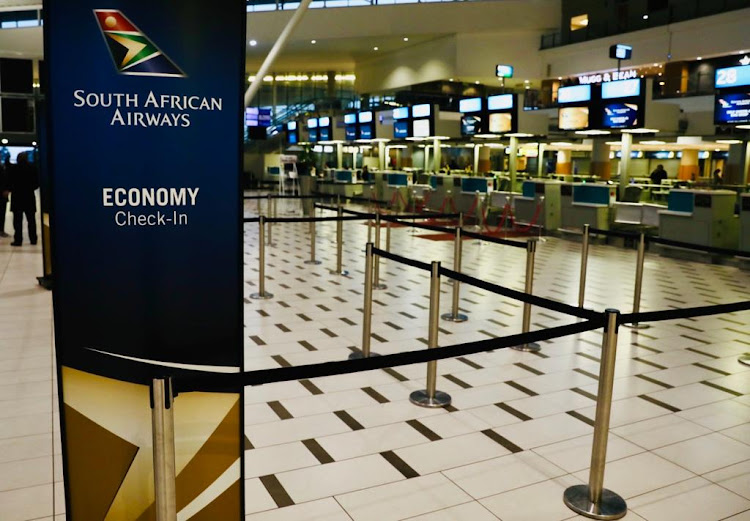 SAA check-in counters at Cape Town International Airport were empty as day one of a strike by unions got underway.
Image: Sunday Times/Esa Alexander

SA Airways (SAA) check-in counters at major airports were deserted as around 3,000 staff members embarked on a strike on Friday that saw domestic, regional and international flights grounded by the embattled airline.

Workers affiliated to the National Union of Metalworkers of SA (Numsa) and the SA Cabin Crew Association (Sacca) - who are demanding an 8% wage hike - downed tools at 4am. 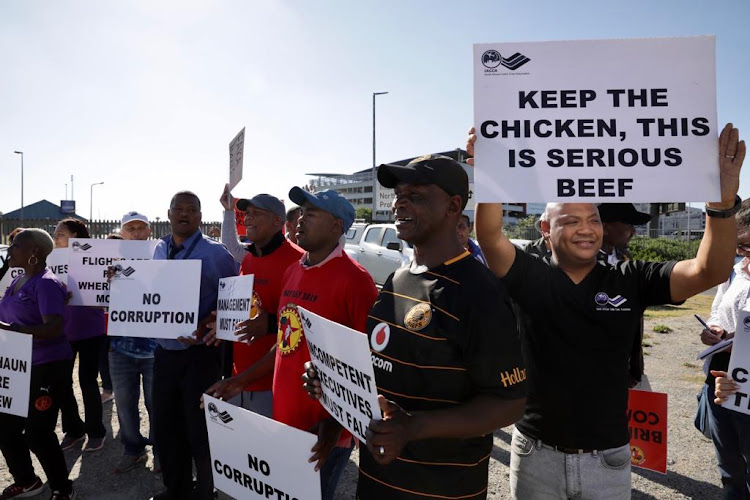 SAA cabin crew member Deon Bells (right) is one of the srtikers who has a beef with the national carrier.
Image: Sunday Times/Esa Alexander

Most travellers seemed to have received the message that flights had been cancelled at Cape Town International Airport.

But honeymooners Peter and Michelle Meier were caught unprepared.

The Swiss couple said they had woken at 3am to be on time for their 6am flight to Johannesburg, where they were due to catch a connecting flight to Mauritius.

“We had no information at all that there’s a strike. Usually I think you’re supposed to see it on TV,” said Peter. “We’ve been very busy the last few days in Cape Town.

"When we came here every office was closed. There were no people at the desk and we could not find our flight anywhere, not even on the dashboard. It did not say it was cancelled so we didn’t know what to do.”

Their efforts to get on to other flights were fruitless.

“Everything is full,” said Michelle.

Camila Pereira of Brazil was among the stranded, frustrated passengers who waited to be placed on alternative flights at Johannesburg's OR Tambo International Airport.

"I was so excited to be visiting Durban for a week, but get here to find there's a strike. I am frustrated. I don't know what will happen to me. My friends were booked on to other airlines but I was told everything is full," she said.

I never thought my first trip to SA would turn out like this.

The tearful student feared for her safety.

"I am scared. I don't know what to think. I never thought my first trip to SA would turn out like this."

A teacher at Maputo International School, who asked not to be named, said: “We were informed of a possible strike by our agency, but there was no communication from SAA. It is stressful for us because we are travelling with minors who don't understand what is happening."

They were returning from a sports excursion at Yale University and were due to catch a connecting flight to Maputo. "Some parents understand, but others are panicking and do not understand. They have tried to make alternative arrangements with no luck, so you can imagine, it's bad."

Marco Antoniazzi from Austria was travelling to Port Elizabeth.

"We had no idea there would be a strike."

Airport staff were asking passengers if they wanted to be refunded, but many said no.

Worried about your flight booking because of SAA strike? These are your options

Passengers who had booked a flight with SAA for Friday and Saturday have a number of options available following the airline's cancellation of almost ...
News
2 years ago

Back in Cape Town, Roanica Paisley and her daughter Nickey Barcoo from Rockland County, New York, said it was difficult to get replacement flights. Initially all they were offered was a number to call.

“There was this kind of nonchalant attitude from the agents. After you become insistent their whole attitude changes and they start trying to find a solution,” said Paisley.

The pair received an e-mail from SAA at 1am informing them of the cancellation.

“We are foreigners,” Roanica said. “This is another country, another continent. We have to go home. We have jobs, we have businesses. We can't stay here.”

We have to go home. We have jobs, we have businesses. We can't stay here.”

Roanica Paisley from the US

SA Cabin Crew Association member and union representative Deon Bells said while the strike was initially planned to focus on a call for higher wages, it became a fight to protect jobs.

Fellow crew member and union representative Sonia Eitz said they were upset with the fact that the latest offer from SAA had terms and conditions attached, including that any increase would only be paid out in tranches – one in April next year and one in October – and that the offer did not include a guarantee of job security. The offer was also contingent on the airline finding the funds so it was not a guarantee.

“It’s basically them saying we’ll pay you if we feel like it,” she said. “We are open to negotiations. We understand the company’s in trouble.”

However, union members were upset that the company was trying to impose the same percentage increase on lower-paid workers as they had agreed to with pilots, “who earn 10 times what we earn”.

@SAA claims that it must retrench 944 workers to save R700 million. And yet it's spends R25 billion per annum on procurement. Many of its contracts are dodgy deals and it is refusing to act against looters and thieves in management and the board.#SAAStrike#SAATstrike pic.twitter.com/XX7Bd6Q198

SAA announced earlier in the week that more than 900 staff could be affected by restructuring due to its precarious financial position.

Acting CEO Zuks Ramasia said in a statement the strike could "exacerbate rather than ameliorate our problem, and will result in a set of circumstances from which there may well be no recovery".

"In the best interest of protecting our customers and their travel plans, we have taken the decision to cancel all domestic, regional and international flights," SAA said on Thursday.

The flight cancellations only affect flights operated by SAA.

Flights operated by other airlines such as Mango, SA Express and Airlink were not expected to be affected.

Comair puts contingency plans in place ahead of SAA strike

Comair has put contingency plans in place to mitigate any impact the SAA strike may have on its flight schedules.
News
2 years ago

It's official: SAA strike to go ahead from 4am on Friday

SAA employees will go on strike from Friday morning.
News
2 years ago