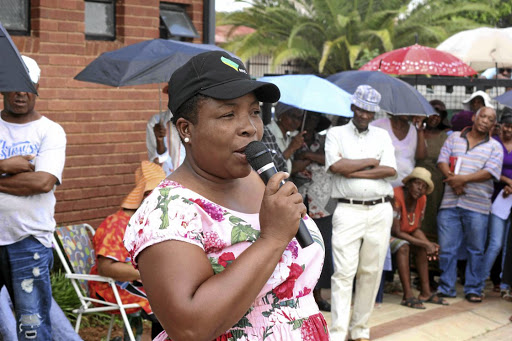 In total, R576,966 was spent on the civic funeral of Tshwane councillor Esther Matumane in Winterveldt.
Image: Rekord Pretoria

The city of Tshwane spent a staggering R400,000 on food for the funeral of its councillor in Winterveldt, north of Pretoria.

The amount is part of the total expenditure totaling R576,966,75 spent at the late Esther Matumane's funeral in September last year.

Talks about the high cost of this civic funeral, managed by the speaker's office, have dominated the corridors of Tshwane House as a report pertaining to this expenditure was among those expected to be put before council soon.

The service provider that was paid R330,699.75 for providing, among others, assorted sandwiches, soft drinks, 100% juice, bottled water and meals among others.

The R69,000 went towards buying groceries.

According to invoices which the city provided to Sowetan, catering was done for 2,000 people at R98 per head for rice, pap, beef stew, roast chicken, two vegetables and one salad.

Two other companies which provided tents, tables, chairs and a sound system, among others, were paid R144,550 and R54,717 for services rendered.

Tiyiselani Babane, the group head in the speaker's office, told Sowetan that there was nothing untoward with the expenses incurred at the funeral.

Babane said Matumane's funeral was "carried out in line with such practice which is currently being changed through the review of the civic funeral policy".

Babane said the policy had been a "practice for many years" before Matumane passed away.

However, the ANC's Tshwane chairperson Dr Kgosi Maepa, who attended the funeral said it didn't make any sense how the city spent R400,000 on food.

"The funeral was attended by around 250 people, and a cow costs R10,000; how many cows did they slaughter?" asked Maepa.

He added: "This is wasteful expenditure as for a civic funeral, the city's own resources including metro police vehicles, a fire engine and the community hall get used, which is what was used [at this funeral]."

Parliament’s standing committee on the auditor-general (AG) has called for increased security for AG staff to ensure the effective implementation of ...
News
2 years ago
Next Article