ANC will not allow EFF to take over Tshwane - Kgosi Maepa 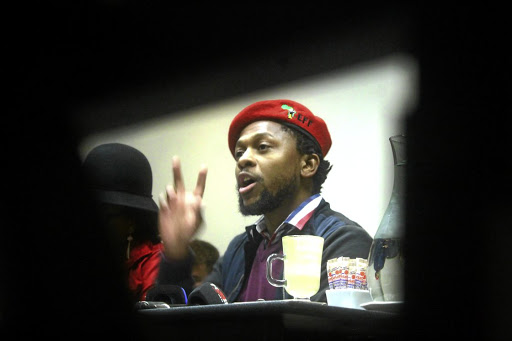 EFF national spokesperson Mbuyiseni Ndlozi says they too will not vote for ANC in the council. /KABELO MOKOENA

The EFF's desire to run the city of Tshwane remains a pipe dream, at least for the foreseeable future, as the ANC stated that it will not put the Red Berets in power.

This comes after the EFF announced that it has cut ties with long-term coalition partner in the city, the DA, after the red berets' demands for its own mayor to be installed was rejected.

ANC's Tshwane regional chairperson, Dr Kgosi Maepa, said they did not trust the EFF and its leader Julius Malema.

"EFF must do what they want but we don't trust them as a party," said Maepa.

He accused Malema of being a flip-flopper. "We would like to put it unequivocally clear that we don't believe news of the said divorce as stated by the EFF.

"Mr Malema is known to waffle a lot to unsuspecting followers and obfuscate at every opportunity."

The ANC in Tshwane will step in to assist the DA in the city following its fallout with the EFF.
News
2 years ago

The fallout between the EFF and the DA came after the DA rejected the EFF's marriage proposal, which would have resulted in the two political parties becoming full coalition partners.

The DA was not ready to take the relationship - which now only sees them voting with each other on specific issues - to the next level.

DA's federal chair James Selfe said the EFF could try to topple the DA in both Tshwane and Johannesburg. However, the EFF would not be able to do this alone as they only garnered 11% of the votes in the 2016 local government elections. The party would need the ANC's 41%.

The EFF has seemingly also accepted that Tshwane will never have a red berets mayor.

"We will never vote with ANC," said EFF spokesperson Mbuyiseni Ndlozi, when asked whether they would approach the ANC for help in taking over the capital from the DA.

ANC unimpressed with EFF withdrawing from DA coalition in Tshwane

The ANC has disapproved of the EFF and DA's squabble over power in the Tshwane region.
News
2 years ago

The municipality is hung as none of the political parties have an outright majority.

Pressed further to explain whether he believed their desire to install an EFF mayor fell flat as they needed either the ANC or the DA, Ndlozi said: "Then it ends there."

Speaking at a media briefing yesterday, Maepa said they were willing to work with DA and other parties that put the interests of the city's people first.

He said this decision was influenced by the fact that most of the wards in the city belonged to the ANC and should the council collapse, the party's constituency would be affected the most.

Maepa said they would work with the DA to ensure that the city's budget, which they voted for in May, is seen through and services get delivered to the people.

"In the May 2019 council, the ANC voted with the DA and others to approve a pro-poor budget that ensures continued service delivery in our constituencies. The EFF was the only party that voted against the 2019/20 budget," Maepa said.

The ongoing spat between the EFF and DA that is threatening the collapse of two metro council is a great reminder of the main pitfall of coalition ...
Opinion
2 years ago

The DA is bracing itself for a possibility of losing two Gauteng metros following a fallout with the EFF.
News
2 years ago
Next Article