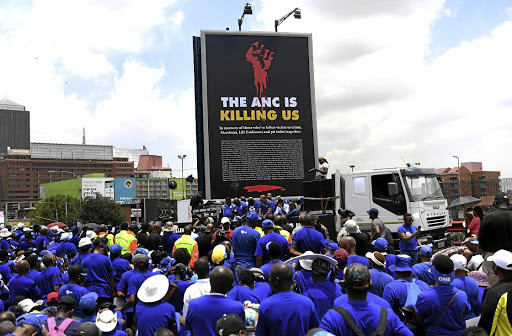 DA supporters gather during a march ahead of the unveiling of a controversial billboard in Johannesburg last week.
Image: Felix Dlangamandla/Gallo Images/ Netwerk24

A defiant DA will today attempt to replace the controversial billboard bearing the names of people who died during the Marikana massacre as well as those of the victims of the Life Esidimeni tragedy.

The party's Gauteng leader John Moodey yesterday said those who wished to take the party to court to challenge its decision may do so.

The billboard unveiled last week in the Johannesburg city centre sparked public outcry and backlash from some family members of the deceased who said they were not consulted. A day later, some of them tore it apart.

"We are not insensitive in the first instance but we have a responsibility to ensure that [those] who died so tragically, their names are not forgotten. So tomorrow [today], the billboard will be repaired as it was vandalised," said Moodey.

"They [families] can exercise their legal rights to take whatever action they feel. If they believe that they are aggravated by the DA's stance we have taken, they are free to exercise that right and we respect it."

He was speaking to Sowetan while engaging train commuters at the Jeppestown train station in downtown Johannesburg yesterday. He said the DA has a contract with the billboard owners and couldn't just take it down.

Meanwhile, outgoing Tshwane mayor Solly Msimanga has dismissed reports he was compelled by his party to resign from his position.

This follows reports that he was forced by the DA to choose between the city and running for the premiership of Gauteng.

DA leader Mmusi Maimane‚ as a South African and "in particular as a black person"‚ should respect the cultural protocol of dealing with those who ...
News
3 years ago

Msimanga announced his resignation on Friday where he told reporters he was stepping down to solely focus on his role as the DA's candidate for the premier of Gauteng post.

"The party has put in a lot of financial and human capital resources into the campaign and said, 'Look, if you are going to be the face [of the campaign], we need you on the ground full time if we want to reach as many people as possible', and they said we shouldn't short-change the people of Tshwane," Msimanga told Sowetan yesterday.

He said the DA had chosen Gauteng as the party's next battleground. "I have never been pushed. The ANC is actually disappointed because they were hoping to keep me dragged back on the issues of Tshwane."

ANC caucus spokesperson Lesego Makhubela accused Msimanga of not being transparent about his resignation.