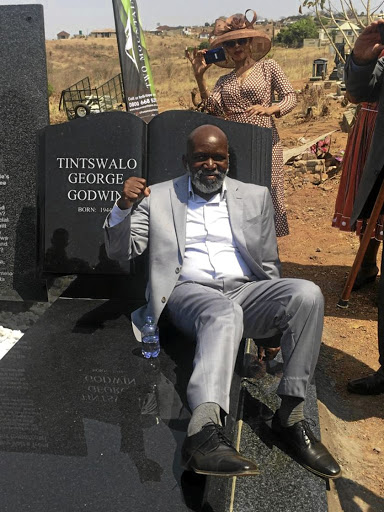 George Mashamba sitting on his tombstone at the weekend.
Image: MUKURUKURU MEDIA

Veteran ANC leader and chair of the party's integrity commission, George Mashamba, is very much alive but caused a stir at the weekend when he showed off his own grave and tombstone.

Mashamba even posed for pictures on his tombstone.

This was on the occasion of the unveiling of the tombstone of his late wife, Happy Joyce Mashamba, a former member of the ANC national executive committee and Limpopo's agriculture MEC.

Her tombstone was unveiled at the gravesite at Mulamula village in Malamulele in the Collins Chabane municipality in Limpopo.

Before the unveiling of the late MEC's tombstone, programme director, well-known author and ANC leader Ernest Khosa illuminated the scene when he told people that "while we are celebrating comrade Joyce's life, we also have the resident of the next tombstone whom we will afford the chance to speak".

All eyes fell on Mashamba, whose names are inscribed on the tombstone adjacent to that of his wife's.

The ceremonial part to unveil the late leader's tombstone was done by pastor Livingstone Mabunda of the Presbyterian Church of South Africa and his wife Gladys.

Mashamba said he dug his own grave next to that of his wife's because he loved her and knew that he would die one day.

"I bought my own tombstone because I do not want you to fight over raising money for a coffin when I die.

"I pay for it myself while I am still alive and you will just buy meat for the funeral because you are the ones who will eat it," he told his family.

He said when he and his wife were married in church, they were told they would be separated by death.

"This is not true because death never separated me from comrade Joyce. That is why I have my grave next to hers," he said.

He also said many Christians said they believed they would go to heaven but were afraid of death.

"They would not like to buy their coffins when they are still alive because of a fear of death. I am not afraid of following comrade Joyce," he said. Mashamba later sat on his tombstone for a photo shoot. All that's missing from the tombstone is Mashamba's date of death.

Pioneer broadcaster Ben Shilubane, who is an uncle of Joyce, praised Mashamba for having been close to his wife until Joyce died.

"If you come and look for another wife in the family, you will receive a positive reaction," Shilubane joked.

The couple would have celebrated 50 years of marriage tomorrow.
- Mukurukuru Media