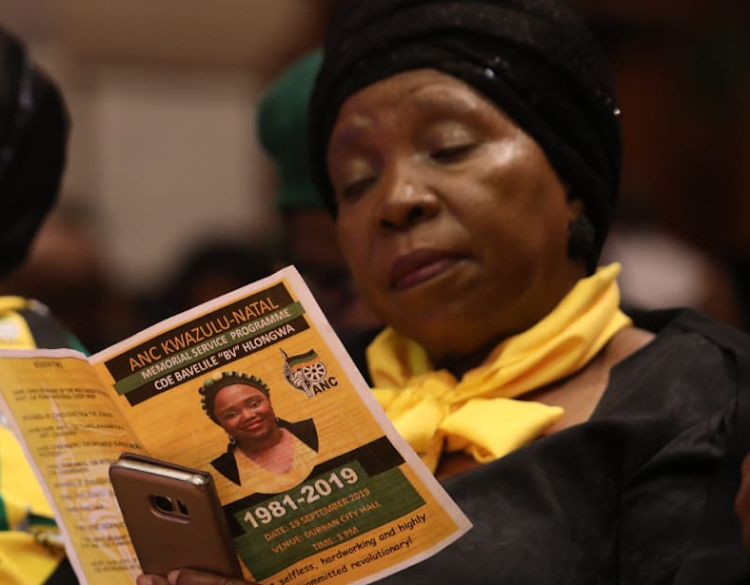 Cooperative governance and traditional affairs minister Nkosazana Dlamini-Zuma at the memorial service for deputy minister Bavelile Hlongwa, who died in a car crash at the weekend.
Image: Sandile Ndlovu

Before her death, deputy minister of mineral resources Bavelile Hlongwa requested a sit-down meeting with former president Jacob Zuma to pick his brain on some of the country's issues.

Zuma revealed this at Hlongwa's memorial at the Durban City Hall on Thursday.

Hlongwa was returning from an ANC Youth League event at the University of Limpopo on Friday when she was hit and killed by a truck on the N1 highway. She had stopped to assist at another accident scene when the crash happened.

"She always had bright ideas. She said to me that we need to meet. 'You put me in that seat and it's hot, but I think there are things we need to change,' she told me.

"She told me what those things are, but I won't mention them. We agreed that when I came back from Zimbabwe we would meet. She wondered how we reached certain decisions when I was still in government and what I think as someone who once led government," recalled Zuma.

The deputy minister of mineral resources was returning from an ANC Youth League event at the University of Limpopo on Friday when she was hit and ...
News
2 years ago

Zuma and Hlongwa had spoken at the University of Limpopo, where they attended a ceremony at which cooperative governance and traditional affairs minister Nkosazana Dlamini-Zuma was appointed as chancellor.

The former president received the news of Hlongwa's death while at the funeral of former Zimbabwe president Robert Mugabe in Zimbabwe on Saturday.

"During the funeral, some came and knelt beside me and said, 'Bavelile is gone.' I thought they had made a mistake. I was unable to focus for the rest of the funeral," said Zuma.

Zuma described Hlongwa as one of a kind and hoped that the ANC would produce more like her. Friends and family shared stories of how tough but caring the "deputy mother" - as she was affectionately called by her siblings - used to be.

"Bavelile took us in and made us who we are. She wasn't an easy person; she was strict. But she loved us and we are thankful to her," said Lucy Hlongwa, who was speaking on behalf of her and her children.

Hlongwa did not have children of her own but had taken in her sibling's children and raised them.

Hlongwa's funeral will take place at the ICC on Saturday, which President Cyril Ramaphosa is expected to attend.

ANC expresses 'shock and disbelief' at death of Bavelile Hlongwa

Mineral resouces deputy minister Bavelile Hlongwa was returning from an ANC Youth League event at the Univeristy of Limpopo on Friday when she died ...
News
2 years ago

Political leaders have expressed their shock and sadness at the death of deputy minister of mineral resources and energy Bavelile Hlongwa who died in ...
News
2 years ago
Next Article