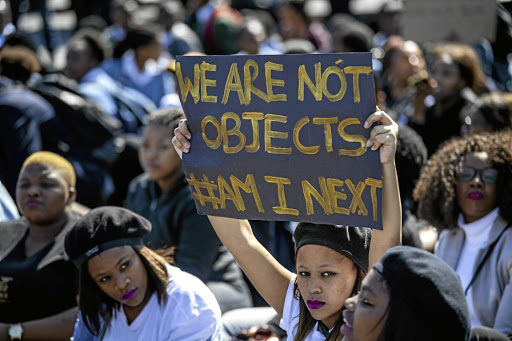 Protesters against gender-based violence and femicide outside the Cape Town International Convention Centre make a strong statement but the soiution lies with men. /Jaco Marais

This past week has felt very bleak for many of us because it has put to the fore the worrying level that SA's femicide is at. It seems we have finally realised the weight of what it means to be a woman or child in SA.

We have been exposed to the anger, fear and terror women and children live with, every single day of their lives, because of men.

The terror they feel in their homes, outside their homes, at school, while walking in broad daylight and at work.

The difference is that women do not feel this way only for a week where issues around gender-based violence are all over the media.

This bleak feeling is how women and children feel every day solely because they have been made vulnerable by patriarchy, toxic masculinity, their gender or sexual orientation. We have seen cases where the victims only crime was being queer.

Unlike us men, women and children never get off days from the danger.

SA is becoming an increasingly unsafe place for women and children to live in.
News
2 years ago

In the previous week we saw victims of abuse, sexual assault and rape, taking to social media to anonymously oust those who violated them. This is an unconventional yet necessary medium because victims have been continually failed by our country's justice system.

During the ousting of perpetrators of rape and abuse, false allegations were unfortunately made. Without a doubt, false accusations are a drawback in the fight for justice. However, I looked at how quickly our society gave full energy and attention towards false allegations.

We did not, especially men, have the same vigour for the uncontested allegations made by victims. Our attention was quickly shifted because the hope was that the movement of ousting perpetrators would die out because who knows, anyone's name may come up - even yours.

We must be wary of not allowing these false allegations from steering our focus away from the realness of what women experience. This is a new and unconventional method; it will have its pitfalls [false allegations being one].

What it does however do, is show us the extent of the desperation that rape and abuse victims have. This desperation exists because they have been failed numerous times by various institutions put in place to secure justice for them.

The student died in ICU on Monday, after going missing three weeks ago
Pic of The Day
2 years ago

To give you a scary insight into some of the failures; in 2018 between April and September, 55 police officers were investigated for rape. Of these, 32 were by off-duty policemen and 23 happened when the policemen were on duty.

This is according to police watchdog, the Independent Police Investigative Directorate. This is just a little window into the reality for victims. They have to source help from a possible rapist.

Reading some of the ordeals of rape, sexual harassment and abuse that victims have gone through, some issues stood out to me.

Firstly, our society's quick gravitation towards poking holes in the stories of victims offers some insight into why rape victims would rather keep quiet than speak out. They are more likely to not be believed than to be believed.

We still haven't learnt that the solution does not lie with women changing their behaviour, it is men who need to change.

The state is expected to close arguments in its case against Nicholas Ninow, the man who pleaded guilty to raping a seven-year-old at a Dros ...
News
2 years ago

Women are told to walk in groups, avoid clubs, avoid walking at night or dressing "provocatively".

If men were to stop harming women, there would be no need for women to protect themselves.

A lot of work still needs to be done on teaching men about consent, that rape can occur in a relationship. NGO Brothers for Life says almost one in five women report being raped by their partner or an ex-partner. No situation warrants rape.

One man said, "you mix with the wrong people and then call all men trash".

This is very problematic because it places the burden on women instead of the one who is in the wrong - the perpetrator.