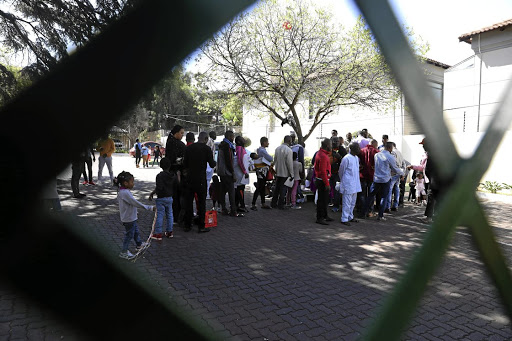 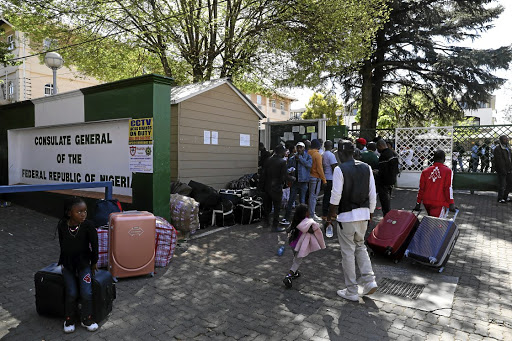 Hundreds of Nigerians queued at the consulate in Illovo, Johannesburg, in a rush to return home following xenophobic attacks across Gauteng.

More than 300 people were flown out of the country yesterday afternoon, after hours of delay as authorities scrutinised their documents.

The rush comes after Nigerian president Muhammadu Buhari's announcement that he had instructed government agencies to assist with voluntary evacuation of his people living in SA.

In the early hours of the morning, two buses left the consulate for OR Tambo International Airport as part of the first group to leave the country.

Not long after the buses departed, the queue outside the consulate became longer. Among those who desperately wanted to leave was Stone Amuchie, who arrived in SA in 2011 and was a cosmetics trader in Tembisa, East Rand.

"Even if things can return to normal, I can never come back to South Africa. To me there is nothing that can bring me back ever again. The majority of the people we met in this country want us to go.

"They are killing people and destroying shops. We thought it was a joke but to our surprise we witnessed it. The situation is worse than anything I have seen in this country. I just want to go," said Amuchie.

On September 2, a mob of people attacked his business and looted it. He ran for his life.

Another Nigerian echoed Amuchie's sentiments at the crowded consulate gate.

"Even 100 years from now, I don't want any of my children to come to South Africa.

"Nobody born of me should ever come to this country," the man said in anger.

By midday, the entrance was packed as more people arrived. Security was beefed up to control the crowd which was made up of men, women and children.

Most of the people who visited the consulate were business owners who employed South Africans in their operations.

Some of those who visited the consulate had expired passports while others needed more documentation as they were travelling with children.

The consulate required sworn affidavits by both parents to confirm that the child leaving the country was not being trafficked.

Some of the people were disappointedly turned away, mostly to get more documents for their request to be sent home to be processed.

Last week, Air Peace made an offer to evacuate Nigerian nationals who were willing to return home following attacks on foreigners in Johannesburg and Pretoria at the beginning of the month.

The first evacuation was planned for Saturday September 7, but was postponed until yesterday to address the issue of expired paperwork of some Nigerians.

The Nigerian foreign affairs ministry said yesterday that 649 Nigerian nationals had registered with the Nigerian missions in South Africa for the free flight offer.

The ministry had expected the first 313 nationals to leave Johannesburg yesterday on the first of the chartered flights offered by Air Peace.

EFF leader Julius Malema recently spoke out against the wave of xenophobic attacks in the country, saying 'only a united Africa can resolve the ...
News
2 years ago

Efforts to get comment from the Nigerian consulate did not yield any results. Journalists were not allowed inside the consulate and officials did not want to speak to the media.

The attacks began on September 1 in Malvern, eastern Johannesburg, and quickly spread to other parts of Gauteng.

Shops, mostly belonging to foreigners, were looted and some set alight.

Police were stretched thin trying to respond to the sporadic attacks which spread to Katlehong, Germiston, Turffontein, Thokoza and even Cape Town.

A total of 12 people were killed in the violent clashes as some of the business people tried to protect themselves from the looting.

Of the dead, 10 were South Africans, police said.

More than 600 people were arrested on different charges.

The South African government has condemned the attacks, adding that they were fuelled by acts of criminality. South Africa faced a lot of international fallout as a result of the attacks.

It was in Nigeria where companies such as MTN and MultiChoice were forced to shut some of their operations as residents of that country retaliated in response of the attacks taking place in SA.

Frantz Fanon was still a student when his philosophy teacher from a small island in the Americas told him this: “When you hear someone insulting ...
Opinion
2 years ago

Nigerians in South Africa who want to escape any possibility of further violent attacks have been offered a free flight out of the country.
News
2 years ago
Next Article