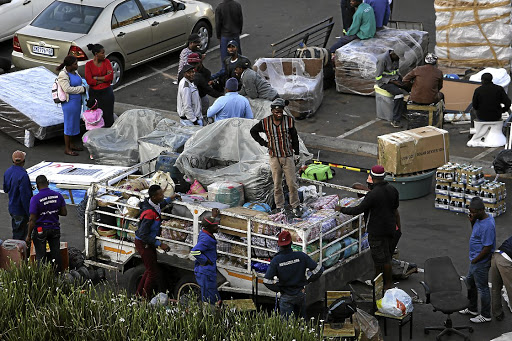 Foreign nationals pack trailers with goods to send home at a garage in Parktown, Johannesburg./ALON SKUY

Dozens of cross-border vehicles transporting foreign national's goods to neighbouring countries abandoned their usual pick-up spots in the Johannesburg CBD, Hillbrow and Yeoville due to threats of violence in those areas.

The transporters, mainly Zimbabwean, decided to move their business to a a quieter spot, a BP garage in Parktown. The garage, as a result, was abuzz yesterday with cars pulling overloaded trailers.

As violence broke out again in the CBD yesterday, some foreign nationals remained adamant that they would not leave SA.

A 41-year-old Zimbabwean man, who did not want to be named, said he was sending his children back to his home country as Joburg was not safe for them right now.

He said he had been in SA for 20 years and was not going leave the country.

"My kids have just left. They are not coming back here, we will find schools for them that side, because it is no longer safe here.

"How can I let them live in a country that's in this state? Other people are leaving and others, like me, are just sending away their children.

"I would never leave. I work here. I don't steal and I'm legal," said the man.

He added that their assessment of the situation was that Zimbabweans were merely just collateral as South Africans have actually taken issue with Nigerians who are said to be selling drugs, trafficking girl children and prostituting them.

Another man, who only identified himself as Kwenza, said that they moved to Parktown because they wanted to ensure that their valuables were safe.

"It's just because of the situation that side (downtown) because of barbaric people. There's nothing to be scared of; the concern here is people's goods [that we are transporting]," he said.

"We are sending things like clothes to the kids back home; there is also our parents at home."