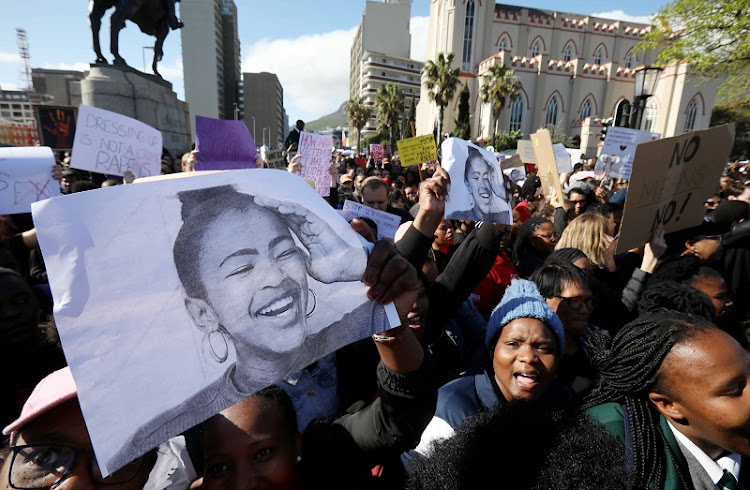 Academics and students from University of Cape Town gather outside parliament to picket against gender-based violence on September 04, 2019.
Image: ESA ALEXANDER/SUNDAY TIMES

Burst water pipes were the only sign yesterday that anyone had once inhabited the burnt-out ruin that used to be the home of Uyinene Mrwetyana's alleged killer.

Residents of I Section in Khayelitsha, Cape Town, torched the house on Tuesday night after learning their neighbour - a clerk at Clareinch post office in Claremont - had been arrested for the murder.

Motorists stopped and shot pictures of the house. Some people cursed and spat as they passed, while others took selfies.

Videos and pictures shared on social media showed flames lighting up the sky as the modest home was reduced to a heap of broken asbestos and charred blocks.

Mattresses reduced to a tangle of twisted wires were strewn in the overgrown yard. City of Cape Town officials were on the scene to cut off the gushing water.

The alleged killer's next-door neighbour, Lungelwa Noveve, said she was still shocked by the allegations.

The Khayelitsha house allegedly belonging to the man accused of raping and murdering university student Uyinene Mrwetyana was set alight on Tuesday ...
News
2 years ago

"We had an impasse with the man when he moved here over a year ago," she said. "He got a protection order against us because we demanded that he produce a letter from the community he came from stating what kind of a resident he was.

"But the court told us to back off. That came to mind when it was revealed that he was a suspect in a heinous crime like this. We have young girls here."

Noveve said relations had slightly improved between her and her 42-year-old neighbour but she found him odd.

"We only greeted each other but he did not say much," she said.

"He never smiled. I don't even know if he has teeth or not. He kept his doors and windows closed all the times. He only used the back door. He was a devoted churchgoer, though."

Noveve said the man inherited the house when a relative died.

Her neighbour, Kholekile Qolo, said he was shocked to hear the post office clerk was linked to the University of Cape Town student's murder.

"I can't allow him to come back here. I have three girls and I shudder when I think about what that poor child went through," he said.

"I am imagining the pain that her parents must be going through. He belongs in jail."

Cape Town City will be playing to honour the memory of the murdered University of Cape Town student Uyinene Mrwetyana when they welcome Golden Arrows ...
Sport
2 years ago

Violence erupted at the University of the Western Cape early on Wednesday amid a rush to identify alleged rapists following the murder of student ...
News
2 years ago
Next Article