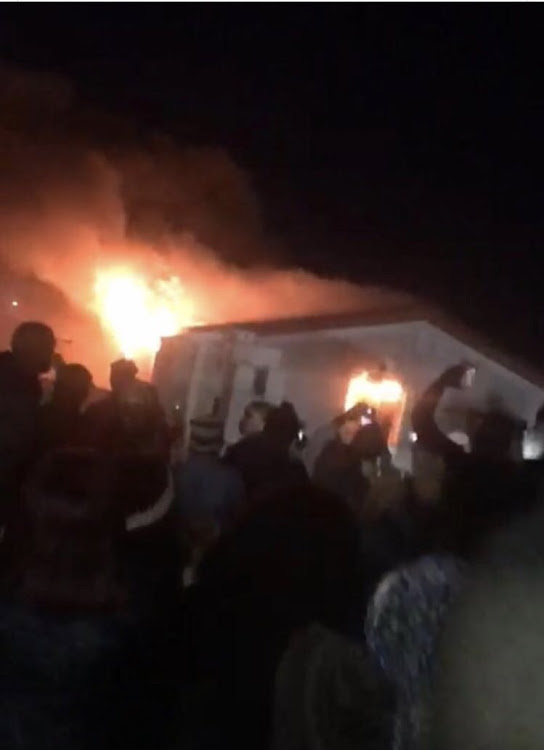 The house belonging to a man alleged to have murdered University of Cape Town student Uyinene Mrwetyana was burnt down on Wednesday.
Image: Twitter

The Khayelitsha house allegedly belonging to the man accused of raping and murdering university student Uyinene Mrwetyana was set alight on Tuesday night.

Angry community members took to the house, located in I-Section, to protest and demand a harsh sentence for the 42-year-old, who allegedly confessed to his crime in court on Monday.

Mrwetyana was raped and bludgeoned to death with a scale inside a Cape Town post office at the weekend. The court ordered on Monday that the man cannot be named as an identity parade has not yet been carried out.

Video clips of the house apparently belonging to the suspect went viral on social media on Tuesday evening.

Clear visuals if #LuyandaBotha house being burnt down by the residence of Khayelitsha #UyineneMrwetyana @eNCA @Newzroom405 pic.twitter.com/cXzeBof1ha

"This office can confirm that a house in I-Section Khayelitsha was set alight by community members this evening [Tuesday]. The owner of the property cannot be identified. The circumstances surrounding the incident are under police investigation and the suspects are yet to be arrested," said Traut.

Cape Town City will be playing to honour the memory of the murdered University of Cape Town student Uyinene Mrwetyana when they welcome Golden Arrows ...
Sport
2 years ago

But Khayelitsha Ward 94 councillor Patrick Mngxunyeni told TimesLIVE that residents demanded a meeting after they saw the police’s forensic unit “digging” at the accused’s yard on Monday.

The decision to burn down the accused’s house was taken at a community meeting earlier on Tuesday.

“Neighbours called me about what was happening. They suspected this had to do with Uyinene’s murder and demanded that I address the community," he said.

On Tuesday, as the word spread that the suspect lived in the property, more community members demanded that a community meeting be held and that community leaders address them.

A general meeting of the community was convened at 6pm, he said.

“At the meeting, the residents said the ANC government is failing us and that women are dying like flies. They said we are not going to fold our arms, we are going to that house.”

Mngxunyeni said he pleaded without luck for people to abandon that idea, saying: "Let's allow the law to take its course."

But he said angry residents would not listen and that he felt unsafe, so he left the meeting. He received a call from police at around 7.40pm informing that a house was on fire.

A resident, who spoke on condition of anonymity, said the protest was to say "enough is enough".

"The people are angry. Yes he was arrested, but we're not sure for how long. We want to set an example of him that rapists and murders are not welcome in our society," she told SowetanLIVE's sister publication TimesLIVE.

Police could not confirm if anybody was inside the house, but the resident was certain it was empty.

"There was no one [inside]. We know him very well. His wife had already left him. Enough is enough; we are tired as women," she said.

The residents actually the youth of this area just chased away the fire brigade truck, they still chanting .... #LuyandaBotha #UyineneMrwetyana @eNCA @Newzroom405 pic.twitter.com/ZnnHlXh6pM

Police said officers had been deployed area to maintain law and order and to quell any further violence.

According to Jermaine Carelse of the City of Cape Town's fire and rescue services, teams were called out to the house fire - but had to leave when they were threatened.

"Upon arrival at the incident, a volatile crowd prevented the service from performing their function. The officer and crew feared for their lives and left the area. As for who the owner of the dwelling is at this stage is unknown," said Carelse.

Clear visuals if #LuyandaBotha house being burnt down by the residence of Khayelitsha #UyineneMrwetyana @eNCA @Newzroom405 pic.twitter.com/cXzeBof1ha