A 42-year-old man has been charged with the rape and murder of Uyinene Mrwetyana.
Image: SUPPLIED

President Cyril Ramaphosa was on Tuesday criticised for being silent when the country is in crisis.

Calls were made for him to address the nation on the ongoing violent protests as well as the killing of women. But instead of addressing the nation, Ramaphosa opted to send ANC secretary-general Ace Magashule to speak on the matter.

DA leader Mmusi Maimane called on Ramaphosa to come out of hiding and address the recent killing of women and the violent protests plaguing Gauteng.

Speaking in Illovo, Sandton, Maimane said it was about time Ramaphosa and his government take decisive action as women cannot continue living in fear.

“I also want to say to President Ramaphosa, it is time that he comes out of hiding and break his silence on the unfolding social and economic crisis,” said Maimane.

“The elections took place and they gave us a new president, it is not that he must hold office, it’s time for him to come out strongly and lead in this time, in this moment.”

Maimane said the killing of University of Cape Town student Uyinene Mrwetyana, allegedly by a Post Office employee, as well as the murder of female boxing champion Leighandre "Baby Lee" Jegels by her estranged policeman boyfriend, showed that the country is in crisis.

“As a nation we find ourselves in crisis, we are a nation in mourning and in fact the news yesterday of brutal and calculated murder and rape of Mrwetyana by a civil servant employed by the state has shocked the collective conscious of our nation.

"The young girl was subjected to such barbaric and inhumane treatment and her life was cut short as she performed a regular errand such as entering the Post Office. This is certainly not the South Africa we want to live in,” said Maimane. 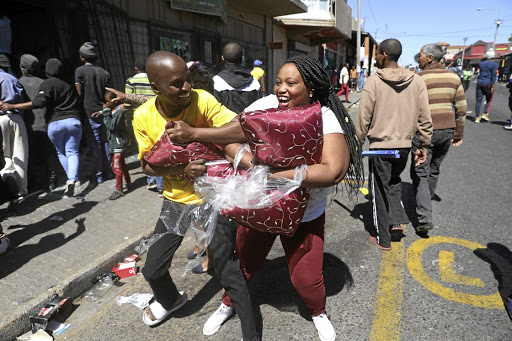 It was free for all for looters in Turffontein yesterday as stores owned by foreigners were looted.
Image: Thulani Mbele

Speaking on the violent protests that have already claimed one life, Maimane said that the intelligence of the country was supposed to have anticipated the unrest and would’ve therefore been able to put preventative measures in place.

“He must oversee the accelerated operation of the national joint operational and intelligence structures in every area affected by lawlessness. It is crystal clear that we should have the intelligence to know what’s happening on the ground. These actions should never surprise us as citizens. I want him to instruct the urgent deployment of Public Order Policing to all volatile areas.

“We’ve got to make sure that there’s a joint operation that sits between national government, provincial government and city government. That we put a stop to this. Those caught breaking the law must be arrested and prosecuted," Maimane said.

Ramaphosa's office today released a statement on the killings of Mrwetyana and Jegels in which he said these were reminders that women in the country were not safe.

"This is a very dark period for us as a country. The assaults, rapes and murders of South African women are a stain on our national conscience," said Ramaphosa.

"We have just commemorated Women's Month. Sixty three years after the women of 1956 marched for the right to live in a freedom, women in this country live in fear - not of the police but of their brothers, sons, fathers and uncles. We should all hang our heads in shame."

The ANC has called on the police to arrest people who have been looting shops around Gauteng during violent protests.
News
2 years ago

Outside Roscommon House, where slain 19-year-old UCT student Uyinene Mrwetyana lived in Cape Town, her friends were talking in low voices, their ...
News
2 years ago
Next Article