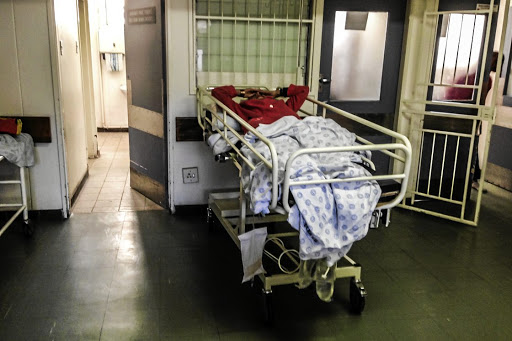 Nurses at Pelonomi Hospital in Bloemfontein say the maternity ward is meant to accommodate 17 women, but they get up to 30 patients a day, with some women forced to sleep on the floors and inside a linen store room.
Image: Waldo Swiegers

The death of a patient in a maternity ward of a troubled Free State hospital resulted in nurses downing tools, as they demanded more staff to be hired.

According to a nurse who works at Bloemfontein's Pelonomi Hospital, on Saturday the woman died when they delayed taking her into theatre due to staff shortages.

She said the woman had just delivered a healthy baby in the ward but started experiencing complications.

"The nurse working inside the ward was assisting other patients and requested student nurses to accompany the patient to theatre.

"Upon arriving at the theatre the student nurses were allegedly turned back and told the patient must return with a professional nurse."

The nurse, who asked not to be named for fear of victimisation, said the woman died from internal bleeding after birth before she could be assisted.

There was only one nurse in the ward looking after the patients. She said the ward was meant to accommodate 17 women, but they have had up to 30 patients a day, with some women forced to sleep on the floor and in the linen storeroom.

The nurse said Saturday's death was the last straw, and the nursing staff embarked on an illegal strike on Monday to force the provincial government to hire more nurses.

They reached an agreement with the provincial health department on Tuesday night to hire 13 more nurses. The nurses returned to work yesterday.

She said at least six deaths had occurred at the hospital since January.

Another nurse, who also asked not to be named for fear of victimisation, said staff members were overwhelmed.

"It breaks my heart to have to talk about this. A woman bled to death because we are understaffed. Even the nurse who delivered that baby is still traumatised," she said.

Provincial health department spokesman Mondli Mvambi said the department had already started to hire more staff when the strike began, but processes were slow because the department was still under administration.

The department was placed under administration in 2013, which means a decision such as hiring hospital staff can't be effected without a clearance from the provincial treasury and the premier's office.

Mvambi said the hospital was burdened because it services locals while getting referrals from North West, Eastern Cape and Lesotho. He said they would investigate the recent maternal death to find out what caused it.

"Sometimes people are delayed for referrals and by the time they get to our facilities, we are unable to assist them.

Decomposing bodies. Electricity blackouts. Water shortages. These are amongst the problems nurses are encountering in the North West‚ according to a ...
News
3 years ago

"Some of them die in our hands and people say we killed them, when it could have been a different case. The investigation will prove where the responsibility lies," he said.

Mvambi said the 13 new nurses were expected to start working today, while the department is expected to hire 81 more people in the near future.

Democratic Nursing Organisation of South Africa provincial chairman Thibogang Thole said the department was supposed to have resolved the issues a long time ago.

"This started last year when we started seeing nurses resigning in their numbers, particularly at the Pelonomi maternity ward," Thole said. "When two people are working in the labour ward and there are more than 30 patients, things become unpleasant."

He said Denosa welcomed the decision to bring in 13 more nurses, adding that they hoped the department would continue to hire more people, as promised.