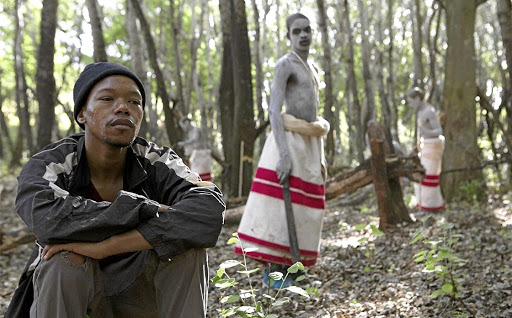 A scene from the film, 'Inxeba', that has sparked controversy for its portrayal of homosexuality amid the process of initiation.
Image: Supplied

Furthermore‚ he said‚ “if cultural beliefs and practices are to be considered‚ the film is harmful and disturbing and exposes 16-year-olds to the sexual conduct depicted in the film”.

“The film included language which was degrading to Xhosa women and further exposes women to societal violence such as rape. It contains harmful scenes which could cause tensions within the Xhosa community and even within the broader African community. By implication it has an effect on the rights of the Xhosa traditional group‚” he said.

Throughout his judgment‚ Raulinga stressed that the Inxeba filmmakers’ rights to freedom of expression could not override the rights to dignity of Xhosa people.

“The ritual of initiation and circumcision is central to the Xhosa people‚ to their very existence and identity. The practice . . . is a right of passage to manhood and fatherhood.

“Initiation or circumcision is strongly believed to be sacred‚ not only by the amaXhosa‚ but by the majority of African people in South Africa‚ and elsewhere in other African countries.

“Sexual intercourse is a taboo subject in the context of initiation‚ which should not even be spoken about‚ let alone practiced. It contradicts the idea of ritual purity‚ which is the cornerstone of circumcision.”

He stressed that this taboo was in relation to any form of sexual contact‚ whether it was heterosexual or homosexual. Despite the judge’s belief that the movie’s content could be found to be harmful - if cultural rights were considered - he said that the process followed by the Film and Publications Board Appeals Tribunal in reclassifying the film was unlawful and procedurally unfair.

Furthermore‚ he said‚ the traditional leaders and cultural rights organisations who had turned to the Appeals Tribunal to reclassify the film had no legal standing to do so.

FPB insist Inxeba (The Wound) has "no artistic merit".
News
3 years ago

'Inxeba' gets it right at the Saftas

Five of the best for controversial film
Lifestyle
3 years ago

A blow against censorship

The movie Inxeba - The Wound returns to cinemas on Friday following yesterday's interim court order setting aside its classification by film ...
Opinion
3 years ago