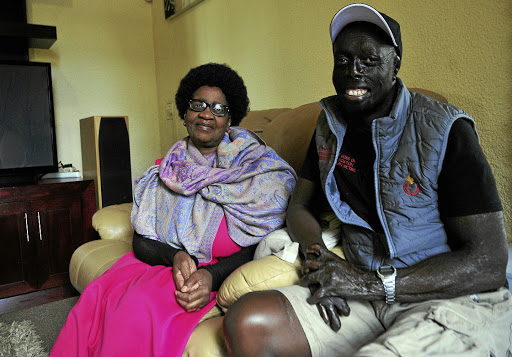 John Nyamuswa with his mother Regina Nyamuswa at their home. / Veli Nhlapo

June is the most memorable month in John Nyamuswa's life. While the 31-year-old burn survivor has no memories of the day that changed his life forever - June 1991 - the scars on his face and body serve as a painful reminder of it.

On that day, the then four years old kid was playing with a friend inside an old car outside a neighbour's house in Daveyton on the East Rand. The two naughtily started a fire and the flames engulfed them, leaving him with severe wounds.

"Miraculously", Regina later learned that her boy was still alive. "... even doctors could not explain what had happened," Regina said.

Nyamuswa has since founded Life Goes On, an organisation that supports burn survivors to regain their confidence and restart their lives anew. "I went through a stage of being intimidated by stares from the public and learned to embrace my scars and my wounds," he said.

Nyamuswa said having gone through the pains and medical treatment for over 12 years makes it easier for him to relate to his support group members. "It's easier for them to let me in because I am no different from them and they know I will not judge them," he added. "People treat us like we are sick, they treat us differently."

Nyamuswa said the incident has motivated him to live life to the fullest.

"I studied IT and after getting a job and working for a few years, I realised all I wanted to do was to help [fire] victims ... and starting Life Goes On made me live the dream of being a custodian of hope."

Thembisa Nikelo, 12, an ambassador for Life Goes On, said she was burnt by boiling water when she was only two.

She uses her ordeal to motivate other kids who are burn victims. Thembisa lost both her legs allegedly due to poor treatment in hospital. She developed gangrene and her legs were amputated.

Nyamuswa is now campaigning to raise funds so the girl could realise her dream of having electronic prosthetic legs to move around more freely.

Thembisa's mother Selina Nikelo said her daughter dreams of owning her own company that will make prosthetic legs of all kinds to help all victims who have lost their limbs. "I work very closely with doctors and specialists in the field who have volunteered to assist and also give us advice on medical kits and procedures when needed," she said.

Nyamuswa and Thembisa have been reaching out to victims in hospitals and schools. "I hope to reach out to more kids by the end of this year and being a father of a seven-year-old myself, I want parents to be mindful of their little ones at all times and educate them on what not to do when they are alone," Nyamuswa said.