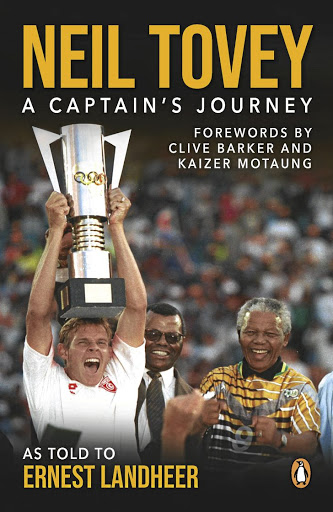 Neil Tovey's autobiography, A Captain's Journey, serves as an instructive piece of history to the SA football market that for too long has not had its story told properly.

The book's cover - an image of Tovey holding aloft the Africa Cup of Nations trophy won in 1996 alongside Steve Tshwete, then sports minister, and late president Nelson Mandela - epitomises SA's rebirth as a footballing nation.

Incredibly, that image was shot merely four years after Tovey and others represented SA for the very first time in international football, against Cameroon in July 1992, in an historic three-match series that Tovey captures in more detail throughout his book.

That success that led to Bafana conquering the continent after such a short period following years of isolation perhaps also highlights what has gone wrong since, with South Africans now celebrating qualification for the quarterfinal at the current Afcon in Egypt as if it's some major achievement.

Bafana, time to invoke the spirit of Uyo

Is it a Herculean task for Bafana?
Opinion
2 years ago

Tovey and the Class of '96 - as his triumphant teammates coached by Clive Barker all those years ago have become known - remain the greatest highlight of SA football.

Tovey chronicles how Bafana, in their formation years, carried the unwanted moniker "4x4" after they lost some games by four-goal margins. Matters turned for the better, according to Tovey, following Clive Barker's appointment in 1994.

He had replaced Augusto Palacios following another heavy loss to Mexico in the US. Barker was Bafana's fifth coach in less than three years - again an indication that Bafana's coaching instability comes a long way.

Tovey occasionally takes the reader into the battles in the Bafana dressing room, like when Shane MacGregor argued with coach Stanley Tshabalala over his preference of boots, only to be banished forever and never get a call-up again.

The ex-Kaizer Chiefs maestro also touches on how he lost the Bafana captaincy to Steve Komphela in 1993 amid allegations of ill-discipline. He was cleared by a disciplinary inquiry chaired by Raymond Hack, but only reinstated after Komphela was dropped.

Stuart Baxter has done something of an about-turn‚ saying now that he understands why Bafana Bafana supporters get so upset when results go against ...
Sport
2 years ago

But for all his known leadership qualities honed during his time in military conscription, Tovey comes across as too self-engrossed in his own personal success to see that football is a team sport. For instance, his misgivings about exclusion from the 1998 Africa Cup of Nations squad that reached the final in Burkina Faso seems misplaced.

He bemoans the fact that Jomo Sono, who had replaced Barker, had seen no need to telephone him and other senior players who were excluded. For what, really? A new coach comes and makes changes. He doesn't have to explain himself to anyone. Tovey then adds SA could have beaten Egypt in the final in 1998 had he been there.

This again points to the arrogance of the Class of '96 that rings true even to this day. The Class of '98 - a completely new team assembled at short notice - reached a final outside the country. No other Bafana side have emulated them.

Neil Tovey has said that he “certainly would not have scored two own goals in one game” had he been selected for Bafana Bafana at the 1998 World Cup.
Sport
2 years ago

Qualification for the 1998 World Cup - SA's first ever - is covered in chapter 10, "No Regrets". This was after Tovey and others who had helped take the country there were axed by Philippe Trousier, the French coach installed by the spineless Safa just months before the tournament in France.

It was a disaster, yes, and Tovey - aged 36 then - tells us he would have performed way better than Pierre Issa, who scored two own goals in the opening game against the hosts. Which is probable, but again it reeks of entitlement and a refusal to move on.

To his credit, Tovey also covered his nomadic coaching stints which at times ended in dismissal. He won the PSL title jointly as Sundowns coach, but he could have done better to take us into how he was fired by the previously trigger-happy Patrice Motsepe.

Overall, Tovey's 245-page book is an enthralling read that should serve to educate everybody. First, the football fans, particularly those who want more insight on SA's return to international football.

Then coaches, who can learn how Barker managed to get the best out of the Class of '96 by being a "player's coach".

And players too can learn on discipline and carrying the pride of playing for the national team.

Jomo Sono has made the stunning claim that it was his tactics as technical director that won Bafana Bafana the 1996 Africa Cup of Nations semifinal.
Sport
3 years ago

And bless, the hapless soldier whose disappointing performances during a South African National Defence Force training session gave a depressed ...
Opinion
2 years ago
Next Article