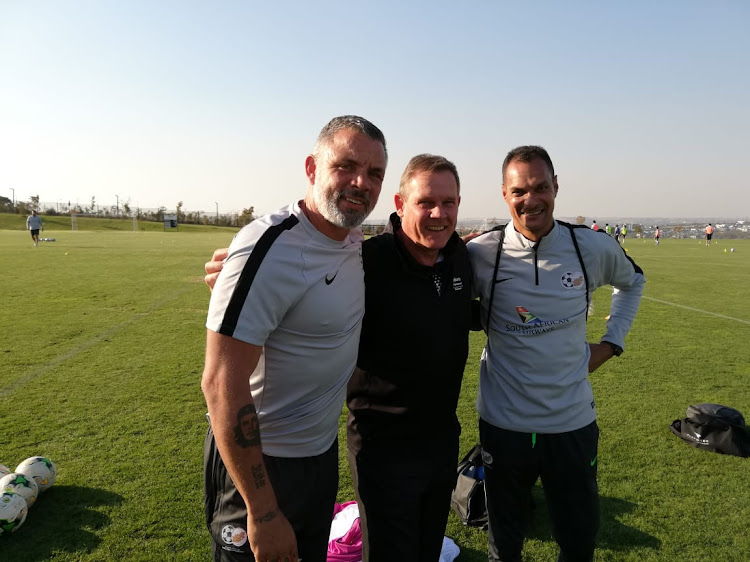 Mark Fish’s presence alone in the Bafana Bafana squad as they prepare for the Africa Cup of Nations can serve as an inspiration to the players as they attempt to make an impact at Egypt 2019‚ says goalkeeper Darren Keet.

Head coach Stuart Baxter’s choice of the flambouyant 1996 Africa Cup of Nations centreback Fish as his second assistant-coach – and who will also double as a scout on Bafana’s Group D opposition – raised some eyebrows.

Former Jomo Comos‚ Orlando Pirates‚ Lazio and Charlton Athletic defender Fish‚ more known for a larger than life approach to his lifestyle since his retirement in 2005‚ has no top-level coaching experience and limited qualifications.

But every squad needs its characters.

And Fish‚ who has tempered his extravagances in recent years at 45 years of age‚ certainly is one of those‚ plus he has a wealth of experience to impart on Bafana’s current emerging stars.

Keet said Fish’s presence in the South Africa squad‚ along with another 1996 campaigner‚ goalkeeper-coach Andre Arendse‚ can inspire the current generation as they seek to progress past a group also including Ivory Coast‚ Morocco and Namibia.

“I mean‚ all the players who won in that ’96 Nations Cup‚ we’ve all looked up to them since we’ve started. Most of them are probably the reason some of us play today.

“And Mark Fish and Andre Arendse are no different. Having them with their experience any time you want to talk to them about it makes it easier.

“On top of that our coaching staff are very easy to get along with‚ very easy to talk to. And when you need information‚ we talk to them and they talk to us.

“Overall I think we have a good technical team‚ and we look forward to some exciting times.”

Baxter has been keen to rope in a 1996 Afcon presence into his technical team.

Previously he also utilised Shaun Bartlett‚ a striker in the 1996 team‚ as an assistant-coach.

Fish‚ still new to Baxter’s squad as the second assistant to the knowledgeable SA U-17 coach Molefi Ntseki‚ has been more of a quiet presence so far‚ Keet said.

"But I think he watches from the outside and you greet him every morning‚ you have a good chat with him‚” the Bafana keeper said.

“And I think that’s largely what he’s here for. He’s here to make sure the players are ready to go‚ and make sure we’re prepared well‚ and things like that.

“And‚ you know‚ if we need advice‚ or if he feels like he can add something he’ll definitely do it.”

Keet made the Bafana No 1 spot for the Nations Cup his own with an inspired display between the posts in the 2-1 qualifying victory against Libya in Tunisia in March that saw South Africa through to Egypt 2019.

SA are currently on the Dubai leg of their Nations Cup preparation camp‚ where they meet Ghana in a warm-up on Saturday.

Bafana open their Afcon against Ivory Coast in Cairo on Monday‚ June 24.