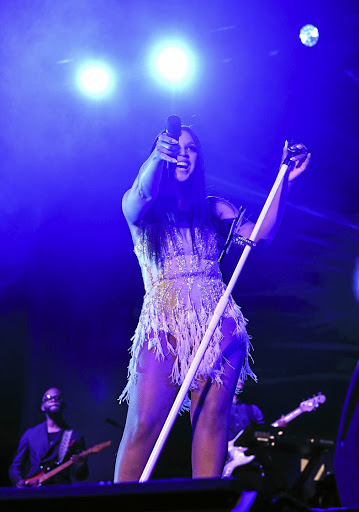 American singer Toni Braxton tried very hard to fight back the tears during an emotionally charged performance of her smash ballad Un-break My Heart.

The tears were not from the rip-your-heart-out lyrics of the song, but she was overcome with emotion after she was awarded her music sales plaques.

Sony Music Entertainment Africa and Universal Music South Africa pointed out during the presentation that Braxton, 52, has had more than one million albums sold in SA and over 20 million streams.

Her platinum single Long as I Live has had 11,000 airplays on 85 radio stations.

Those were some of the reasons that she sold out the 20,000 capacity Ticketpro Dome in Johannesburg on Saturday night.

"Thank you guys. This means so much to me. Sometimes I have great days, sometimes I have bad days. The love makes it all worth it," Braxton said when she was awarded.

What followed was an electric performance of Un-break My Heart that brought down the roof, proving that Braxton has still got it.

Leading up to the moment, Braxton was not in top form - from mixing up the dance choreography to failing to impress with diva divine custom changes.

There was an awkward moment in which she attempted to play the piano but gave up midway after a failed take-off.

She often relied on the overzealous crowd to lift her up by engaging with them, instead of piping out the notes. While it was charming, in some parts, it killed the mood.

But fans didn't seem to mind as she took them down memory lane with classics such as Just Be a Man About It, He Wasn't Man Enough, Breathe Again and Hit the Freeway.

Her hour-long set didn't include other favourites such as Spanish Guitar, The Heat and Love Shoulda Brought You Home.

Local songbird Shekhinah opened for Braxton with her hits Suited, Please Mr and Back to the Beach.