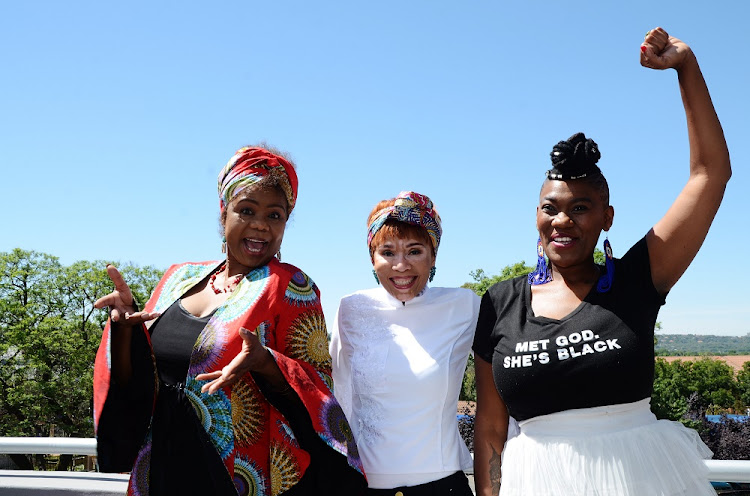 It is all thanks to their nuanced performances in the riveting drama on e.tv telenovela Imbewu: The Seed after the show’s big secret unfolded.

The show, which premiered in April, has kept viewers on the edge of their seats over an ancient Zulu traditional practice. In case you are in the dark, like Tony Kgoroge’s character Ngcolosi, let me bring you up to speed.

After Ngcolosi proved to be infertile, his conniving mother MaNdlovu (Mtshali-Jones) and wife MaZulu (Khumalo) conspired to make sure that his pastor brother Phakade (Sandile Dlamini) fathered their three children.

On Wednesday, Phakade’s wife KaMadonsela (Zwane) finally discovered the truth and exposed it, to devastating effect.

“I’m a big critic of myself and I always have little things that I see all the time, even if people don’t see it. That’s why I don’t watch myself,” Khumalo says after we finish watching three episodes of the show.

“It wasn’t easy, because I’ve thought about it a lot, that when the secret comes out, how am I going to react?

“I came out with different angles on how I should handle it and at the end I decided to internalise MaZulu’s reaction,” she said.

The trio sink their teeth into the storyline, delivering vulnerable yet powerful performances.

The Madea series comes to an end
Entertainment
3 years ago

“I think this role has expanded me as a performer. Playing a woman that is married and a pastor’s wife with two kids is not who I am,” Zwane shares.

Before Imbewu, she had not seen much screen time since her break-out role on Generations from 2009 to 2012. She is nothing like her middle-aged, matronly screen persona. In fact, the 33-year-old rocks an edgy half-shaved head when we meet.

“I channel my aunts and the experiences of being in similar situations that married women go through,” Zwane says.

“In order to be a performer you must have rich interactions with people. One thing I did was visit a rural church and just observed.”

The show has been a ratings hit and its unstoppable trajectory has been a mystery, especially since it airs at 9.30pm – considered the death slot in television.

“I didn’t think it would be this big, especially because I have just come out of a show that failed [Broken Vows], so my confidence was weak,” Mtshali-Jones confesses.

Imbewu had a steady start in its first three months on air, securing a million viewers. In August the viewership had climbed to two million and it crossed the three million mark last month to become etv’s third most watched show. With this explosive week, the show is banking on four million viewers.

“At first it was like the time slot is all wrong, it’s too late. Now we are getting ‘this is the perfect slot and we can’t sleep before watching Imbewu,’” Khumalo observes. “I think what we do best is tell stories that are relatable to people – they can see themselves in those stories.”

The drama does not end in front of the camera; there have been plenty behind-the-scenes scandals.

Controversial actor Mpumelelo Bhulose was fired from the show and replaced by Kgoroge. Xolani Mfeka was also axed, while starlet Enhle Gambushe was killed in a car accident.

“We knew from the beginning we have a good story, so we cannot go wrong... That gave us strength. Every production in their first season they have their ups and downs, then they get through it,” Khumalo replies when I ask her about the show’s countless scandals.

Khumalo is also executive producer of the show. She left the most watched show in the country, Uzalo (10 million viewers), for the venture at the beginning of the year.

This is the first role in her illustrious career where Mtshali-Jones has played a baddie.

The show is filmed in KwaZulu-Natal and has given her a chance to return to her home town.

“I spent many years working in Joburg and people assume I’m from there. My children are in Cape Town.

“It’s been such a blessing for me because I still have both parents. To be working in Durban I see them all the time.”