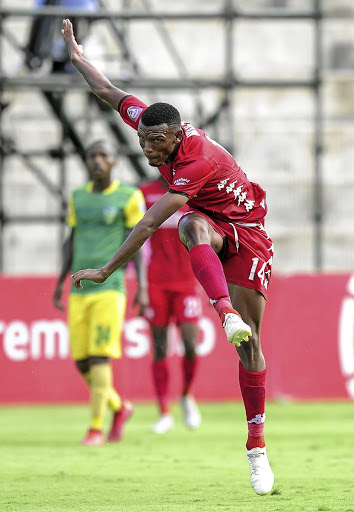 Mothobi Mvala focuses on the ball during a fixture against Free State Stars at Makhulong Stadium. The central midfielder has shut all the doors to offers from big clubs.
Image: Sydney Seshibedi / Gallo Images

Despite growing interest from bigger clubs, Highlands Park ace Mothobi Mvala looks set to remain at the Tembisa club at least beyond the impending season.

Fresh from scooping the club's player of the season and top scorer awards, Mvala has shed light on his immediate future.

"The coach [Owen Da Gama] told me that 'you know here at the team we really want you', the management told me 'you know what... you are a very special player, so we are still going to use you," said Mvala.

"They [Highlands] offered me, wow! Something good.

"I have a running contract with Highlands, it's a marathon [long term] contract. Whatever happens will happen, if it [the move] doesn't happen it doesn't matter. I am happy here and I will stay focused."

In January, Da Gama reiterated "there's no chance of that [selling Mvala]".

"Highlands Park is not a selling team. A team offered us R10m for Mothobi and we refused [the offer]."

Bidvest Wits and SuperSport United are some of the clubs believed to be interested in the former SA U23 star.

Defender was honoured by club
Sport
2 years ago

However, his rich vein of form plummeted in the second period of the season as he only managed one goal.

"In the first round we were coming from the NFD [National First Division], so most teams didn't know who was a threat. They didn't know me, that's when I capitalised," Mvala explained.

For his ability to net goals from the midfield, the lad from Theunissen, near Bloemfontein, lauds the club's fitness trainer.

"It's all about hard work because coming in as a midfielder, attacking the box isn't an easy job. Credit must go to our technical team, especially our fitness trainer Simone Conley," said the 2016 Rio Olympian.

Highlands open their new season by hosting an unpredictable Kaizer Chiefs side at Makhulong Stadium on August 4.