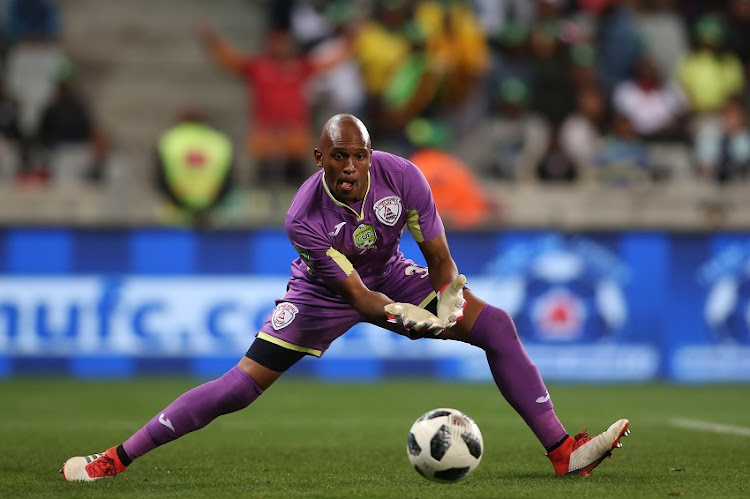 For 10 years since he turned professional‚ goalkeeper Thela Ngobeni has never managed to cement a regular place between the posts for Kaizer Chiefs and Mamelodi Sundowns.

It is no wonder that the 30-year-old Katlehong-born goalkeeper has notched up a mere 38 appearances in all competitions since his debut for Chiefs in the opening match of the 2009/10 season against SuperSport United.

Unfortunately for the 1.77m tall Ngobeni‚ he injured his jaw in that game‚ which turned out to be the last for him in a three years he spent at Naturena with Itumeleng Khune and the experienced late Aurthur Bartman preferred instead.

Of the 38 matches‚ 25 came while on loan at Free State Stars during the 2016/17 campaign which saw him end the season with the Nedbank Cup winners’ medal around his neck.

The Chiefs development product was unveiled as a Highlands Park player on a three-year contract on Tuesday along with five other new players.

And he said that for the first time in his decade-long career‚ he feels he is at an environment where he can have a proper shot at nailing down a regular place in the starting team.

“I’m very excited to be here really‚” he said.

“I am just happy that finally I made a move permanently to go and try my luck somewhere else in an environment where I am welcomed and feel special‚” said Ngobeni.

He revealed that the Lions of the North have been hunting him down for a number of years.

“I’m happy that finally it happened.”

As if just a solitary match in three years at Chiefs was not demoralising enough‚ Ngobeni’s four and half years he has spent at Sundowns produced only a handful of appearances for the Tshwane giants.

After returning to Sundowns following the expiry of his loan move at Stars at the beginning of last season‚ Ngobeni reveals that he had already made up his mind about leaving the cash-rich star-studded club.

“In December already‚ in fact at the beginning of last season really‚ I knew very well that my contract with Sundowns is coming to an end and I had made up my mind. “My mind was clear that I wanted to move to another team unfortunately it just could not happen in the previous season‚” said Ngobeni.

The well spoken Ngobeni said it was a meeting with Highlands’ director and shareholder Larry Brookstone which led to him deciding to join the club.

Having been largely reduced to a spectator throughout his career‚ it could have been easier to lose focus and eventually fall off the rails but not Ngobeni.

So how did he manage to stay in the right frame of mind for all those years?

“Look I am a very strong individual. It has been 10 years without getting regular game time but I have managed to stay strong until today‚” Ngobeni insists.

Ngobeni will wear jersey No.42 and will fight for a starting place with veterans Greg Etafia‚ Kapuwa Kapini and Marlon Heugh.