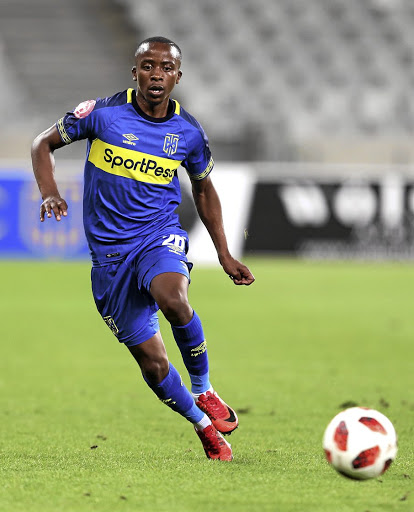 After suffering a near-career ending injury towards the end of last season, Cape Town City midfielder Thabo Nodada is raring to start on a clean slate this season.

Nodada fractured his leg in February in City's 3-0 home thumping of Highlands Park.

"I can kick the ball and I can run, so I can say I am getting there. At the moment I think I am 60% fit. I missed being on the field of play. I cannot wait to play football again," Nodada told Sowetan yesterday.

"But, again, I won't put myself under pressure. Maybe I may miss the first league game [away to Baroka on August 3] because I do not want to take risks."

Before picking up that severe injury, the lad from Ixopo, KwaZulu-Natal, had fancied his chances of making the final Bafana Bafana squad for the Africa Cup of Nations in Egypt.

"I got injured at a very crucial time, my dream was to go to Afcon with Bafana and I was positive about it before the injury," Nodada said.

"You can imagine how painful that was . I mean being on the sidelines ahead of Afcon. At the time my team was also fighting for the league and it hurt me to see them eventually not winning the league while I am injured."

Nodada believes the Citizens have what it take to clinch the league title in the new season.

The 24-year-old workhorse is banking on the foundation the club has laid over the past few seasons.

"We have been one of the contenders in the past few seasons and that gives me confidence that we can win it [the league] this time around.

"We have a good squad and a good coach [Benni McCarthy], that's a perfect recipe for success," Nodada stated.