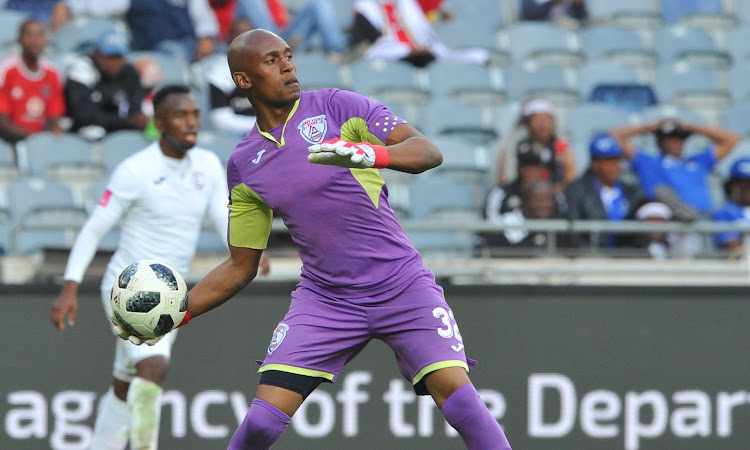 Goalkeeper Thela Ngobeni has revealed that “there was a possibility” of a return to Kaizer Chiefs in January and in this current transfer window but it was Highlands Park that were more seriousness about his services.

Ngobeni was unveiled as a Highlands player along with five other players on Tuesday and joins Owen da Gama’s Tembisa-based side from Mamelodi Sundowns on a three-year contract.

Chiefs had been on the hunt for a goalkeeper since the turn of the New Year following a long-term injury to Itumeleng Khune and a series of howlers from second choice Namibian keeper Virgil Vries.

Ngobeni has revealed that there were talks between his agent and Chiefs during the January transfer window but he opted against the move at the time because Amakhosi apparently offered a short-term deal.

“There was a possibility‚ to be honest‚ but I think Highlands Park showed more interest and they kept on knocking on my door for the longest time and eventually I had to open the door for them and listen to them‚ and the rest is history‚” Ngobeni told SowetanLIVE.

“I tried initially to ignore their (Highlands) offer but they really kept pushing‚” reveals the 30-year-old Katlehong-born star.

Ngobeni said he has had his “fair share at so-called big clubs” and feels the move to Highlands made more sense than a return to Naturena.

“There was a possibility of joining other teams also‚ not just Chiefs. So I wanted to be in a space where the formula works best for me‚" he said.

“I went to Free State Stars and I did well there although I think I could have done better.

"So why not come to a team like Highlands a team that is in the process of growing and building the brand?”

At his age‚ he is at the height of his powers as a goalkeeper‚ unlike most in-field players who start to worry about their advancing years as soon as they get onto the other side of 30.

“I am just happy that finally I made a move permanently to go and try my luck somewhere else in an environment where I am welcomed and f eel special.

"I feel very honoured to be here with this bunch of guys who did great last season‚” said Ngobeni.

Ngobeni will wear jersey No.42 and will fight for a starting place with veteran Tapuwa Kapini‚ Marlon Heugh and young Kyle Peters.

They will be under the tutelage of Stephan Ekakala‚ a DRC born goalkeeper coach who goes wherever Da Gama coaches.