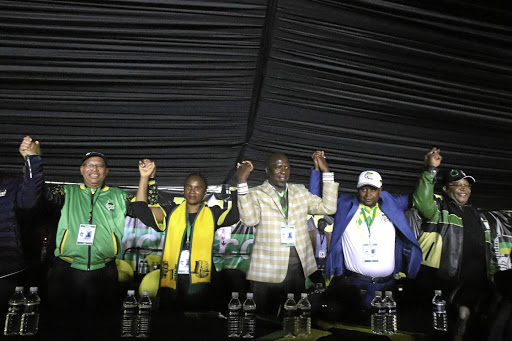 Mathabatha gave them the letters after the ANC National Working Committee, which met on December 3, ratified recommendations by the party's integrity commission that all ANC leaders named in the VBS "Great Bank Heist" report should step aside from all party activities.

The same message was also communicated to the Provincial Executive Committee (PEC) by ANC secretary-general Ace Magashule in a letter seen by Sunday World.

At a meeting on Friday afternoon, the PEC also asked Msiza and Radzilani, who is also mayor of the Vhembe district municipality, to consider not voting at the list conference to avoid tainting the conference and opening its outcome to possible legal challenge.

The duo were implicated by a few of the officials who were interviewed by investigators during the inquiry into the looting of VBS Bank.

Radzilani was alleged to have complained about receiving less money than municipal officials despite allegedly playing a huge role in making sure that municipal deposits were not withdrawn from the bank.

Msiza was allegedly labelled a kingpin in the "heist" by one of the bank's officials, who claimed that Mzisa had influenced municipalities to deposit money with the bank.

Radzilani confirmed that she was served with the letter by Mathabatha.

"Yes, I can confirm that I received a letter while we were in a PEC meeting where we were discussing issues about the list conference. The letter was communicating the same decision of the integrity committee that I should step aside for being implicated in the VBS report," she said.

She said she respected the party's decision and would abide by it no matter how painful it was.

"What pains me is that my own organisation does not want to give me an opportunity to give my side of the story. I was implicated through a conversation between two people whom I do not know.

" I was not afforded an opportunity by advocate Terry Motau's investigators and the ANC's integrity committee," she said.

Radzilani said she would write to the ANC NEC to appeal against the decision as she believes that organisational processes were not followed.

She also confirmed that she was asked by the PEC to attend the list conference as a non-voting delegate, but said her name would still be on the ballot for consideration by delegates.

Msiza couldn't be reached for comment at the time of going to press.

ANC spokesperson in the province Donald Selamolela confirmed that the PEC received a letter from Magashule's office informing them of a decision to ask two of their officials to step aside.

Selamolela also confirmed that the implicated officials were advised by the PEC not to vote at the list conference.

When asked if the ANC intended to replace the officials on an interim basis, Selamolela said the matter would be discussed today.