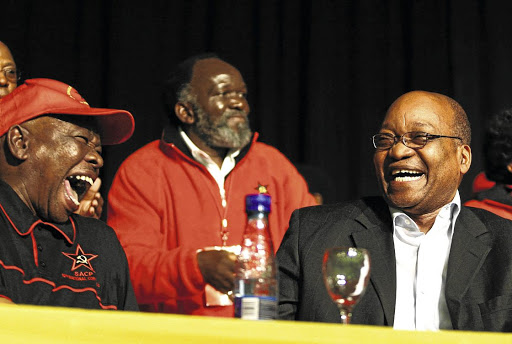 ANC integrity commission chair George Mashamba has passed the buck to the party's national executive committee (NEC), asking it to suspend leaders implicated in the looting of the VBS Mutual Bank.

Party veteran and former Robben Island prisoner Mashamba yesterday told Sowetan that his committee met at the weekend and took a decision that the party's decision-making body in between conferences should act on the matter.

"To protect the integrity and reputation of the ANC, the national integrity commission has advised the NEC that these members [implicated in "The Great Bank Heist" report by advocate Terry Motau] should be directed to step aside from all leadership positions and activities."

Mashamba said the party's reputation and credibility had been seriously damaged by the VBS scandal.

They were both expected to appear before the commission but Mashamba confirmed that neither of them had come to explain their side of the story. Msiza had, however, indicated that he would be challenging the report in court.

Most Limpopo municipalities lost millions meant for service delivery after they illegally made deposits to the bank allegedly in exchange for commissions paid by the bank to municipal officials and politicians.

President Cyril Ramaphosa must ensure that the ANC pays back any money it might have received from VBS Mutual Bank and that criminal charges are laid ...
News
3 years ago

Matome Moremi, acting ANCYL provincial secretary, said: "The decision of the national integrity commission is consistent with the call made by the ANCYL in the province that the two leaders implicated in the VBS report must step aside.

"The NEC must give the ANC in Limpopo clear instructions to tell mayors of municipalities that made the illegal investments into VBS Mutual Bank to resign."

Different municipalities had begun taking action against municipal managers and chief financial officers who invested in VBS. However, Moremi said mayors should also face the music.

"This is informed by the belief that those municipal managers and CFOs were implementing instructions of the mayors. The mayors in those municipalities were the ones who had attended the meetings where decisions to make the illegal investments into VBS were taken."

ANC spokesperson Pule Mabe yesterday said the party welcomed the recommendations which may form part of the NEC's discussions when it meets on Friday. Mabe said the party would then "afterwards convey its position out to the public".