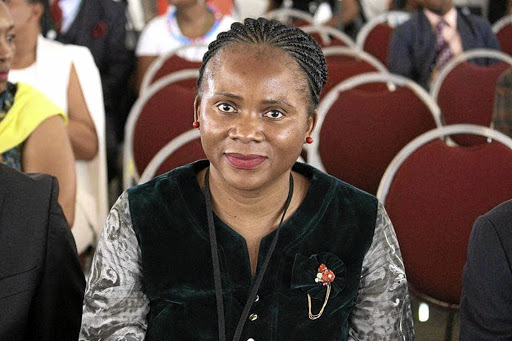 Limpopo ANC deputy provincial chairperson Florence Radzilani has fired a broadside at the VBS report and the ANC's integrity commission.

Radzilani, mayor of the Vhembe district municipality, is among ANC leaders implicated in the report compiled for the SA Reserve Bank by advocate Terry Motau.

Motau's adverse findings against Radzilani resulted in the ANC integrity commission asking her and her fellow comrades implicated in the report to "step aside".

However, in a letter written to ANC secretary-general Ace Magashule on November 1, Radzilani attacked the integrity commission and the report and asked Magashule not to allow her to appear before it as there was no basis for her to do so.

Radzilani, who recently hogged headlines when the audio in which she recorded ANC provincial chairperson and Limpopo premier Stan Mathabatha asking to have an adulterous affair with her went viral, said she did not instruct her municipality to invest money in VBS as stated in the report.

She said the money was invested by the former municipal manager and chief financial officer who were seconded to the struggling municipality by the Limpopo provincial treasury."These were the two officials who invested money with VBS and did so before I was appointed to the municipality.  In fact, the agreement between VBS and the municipality was signed in January 2015. As the executive mayor, I was never involved in any of the investment decisions to invest with VBS bank, nor did I have any influence over these decisions.

Radzilani criticised her party's integrity commission for announcing that she should "step aside" as no one had lodged a complaint against her.

She also said the commission didn't grant her an opportunity to make representations. "I am also mindful that when the integrity committee [sic] met on 27-28 October 2018 to consider ethical judgments in relation to members of the ANC implicated in the VBS saga, it stated that 'every cadre accused of, or reported to be involved in, corrupt practices account to [it] immediately or face disciplinary action'.  Furthermore my understanding of the integrity committee [sic] is that any finding that it might make in relation to any member would be premature without giving that member an opportunity to address [it] . "In the circumstance, I request that you confirm in writing that I am not under consideration by the integrity committee [sic] or the NEC in relation to the occurrences at the VBS Bank given what I have set out above," she said.

Attempts to solicit comment from Radzilani drew a blank.

ANC spokesperson Pule Mabe said: "The matter has been referred to the NWC for completeness and finality."

Meanwhile, a group of VBS minority shareholders in Venda are opposing the Reserve Bank's application to liquidate the bank in the North Gauteng High Court in Pretoria on Tuesday.

The group's spokesperson Muvhulawa Mandavhi said they had secured a legal firm to oppose the application on technicalities.

A voice recording said to be that of Limpopo premier Stan Mathabatha declaring love to his provincial deputy in the ANC has emerged.
News
3 years ago
Next Article