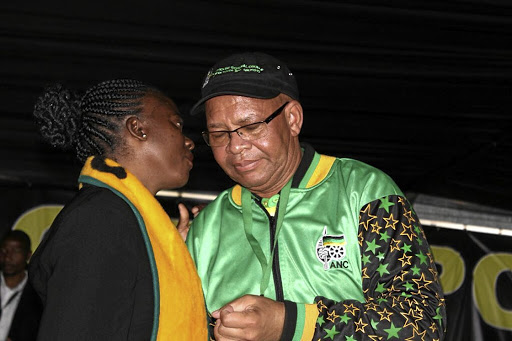 Limpopo premier and ANC provincial chairperson Stan Mathabatha has admitted that the voice in the infamous voice recording in which he allegedly proposes love to his party's provincial deputy is his.

Mathabatha admitted this in his court papers filed on an urgent basis at the North Gauteng high court yesterday in Pretoria, in which he sought to interdict Sunday World and City Press from publishing the story about the details contained in the tape.

His deputy and mayor of Vhembe district municipality, Florence Radzilani, who was also cited as one of the respondents in the court application, filed an answering affidavit in which she confirmed that she recorded Mathabatha on the advice of her husband, Stanley.

Judge Nelisa Mali dismissed the premier's application with costs last night, saying both the premier and mayor were public personalities.

Radzilani was implicated in the VBS scandal for allegedly receiving R300,000 from VBS after the municipality deposited R300m into the bank.

Mathabatha, who was not present in court, argued through his lawyer, Lindelani Sigogo SC, that the mayor unlawfully recorded their conversation as she did not make him aware that she would do so.

Sigogo also told the court further publishing of stories about the recording would invade the premier's privacy and injure his dignity. He said Radzilani should have instead reported the conduct of the premier to the relevant authorities as harassment.

"In the audio, she is the one who initiated the topic. What the premier did is not wrong but shameful," he said, saying that the mayor intended to embarrass the premier by publicising the audio clip.

The sixth respondent has tricked [me] into a telephonic communication with her wherein I expressed my love attraction and feelings for her.

Sigogo also argued that the mayor was trying to silence the premier as he was about to take action against her for her role in the VBS scandal.

He said the mayor's intentions were clear as the audio was recorded in March but only released this month following the publishing of the VBS forensic report.

Acting for Sunday World, Michael Laws attacked the premier's version and pointed out that according to the law, a private citizen who is a party to a telephone conversation was legally allowed to record such a call provided that they do not intend to use the audio clip to commit any criminal offence.

Laws also challenged the premier's version that he only learnt on Friday about the reports about him and the tape.

Grace Goedhart SC, appearing for City Press, told the court that the interdict the premier was asking for was a "futile exercise as the recording has already been widely publicised".

In her affidavit, Radzilani said: "I confirm that the applicant (Mathabatha) sent me an SMS on the 8th of March 2018 to inform me that he will call me when he is done at the meeting. I was surprised when I arrived in his hotel room after closing the door, he grabbed me and he said the two of us we are in love. He further stated that my body has all the ingredients he wants from a woman. And I pleaded with him not to do that to me and he said I'm behaving like an old-fashioned lady. I then requested him to give me time to think about it and requested to go and rest at my hotel ...

"When I arrived at the hotel, I related the story to the fifth respondent (her husband) who advised me to record the applicant ... . Given that marriage is a highly personal and private contract, it would be a blatant intrusion on the dignity of my husband if I don't disclose the love proposal made by the applicant."

Mathabatha's affidavit reads in part: "... unbeknown to me and without my consent, the sixth respondent (Radzilani) surreptitiously recorded the telephone communication that I held with her after she had initiated the call to me.

"The sixth respondent has tricked [me] into a telephonic communication with her wherein I expressed my love attraction and feelings for her. I believe that such communication between two consenting adults and done with mutual respect is protected by the constitution. It is not for publication and distribution for public consumption."

The recording has since gone viral on social media.

A voice recording said to be that of Limpopo premier Stan Mathabatha declaring love to his provincial deputy in the ANC has emerged.
News
2 years ago