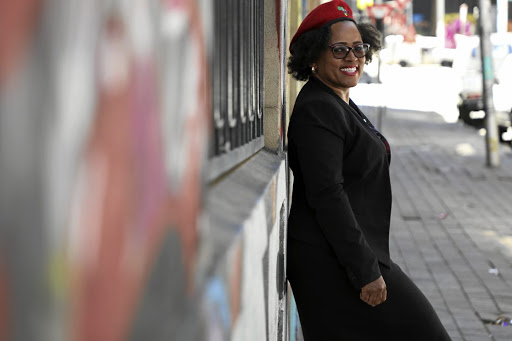 EFF Gauteng chairperson Mandisa Mashego is the first woman in the party to be elected as a provincial leader.
Image: Thulani Mbele

After her election at the beginning of this month, Mashego is the only woman provincial leader in the party.

Born to a Xhosa mother who had a white father, she says her mom was fairly light in complexion and classified as "mixed race".

Because of her skin colour, she was ostracised but also had certain privileges not allowed for ordinary black people.

"My parents could never get married. We would travel to Eastern Cape and sneak onto first class where she would sit. But I had to cover my head so I wouldn't be seen.

"At times police would stop her and ask whose child I was - because I was much darker when I was younger. I was exposed to racism at a very young age, being called a k###@. I grew up believing I was inferior to my mother because of society," says Mashego.

Born in King Williams Town, Eastern Cape, and raised in the rural village of Mayfern near Mbombela, Mpumalanga, the 45-year old says her father had a huge influence on her passion for politics.

Mashego to grow voters in Gauteng.
News
3 years ago

"He was a man who beat up white men back in apartheid days. He taught me the art of defiance. I also had cousins and uncles who were all involved in the Struggle. I was a teen handing out pamphlets at the forefront of protests. But my mom, who wasn't political, would drag me home," she reminisces.

"I saw her as this phenomenal being. A woman ahead of her time," Mashego said.

Mashego also credits Nelson Mandela for her political journey. "I always believed in equality. I joined the ANC as a young girl because, like the rest of the country, I believed in the Freedom Charter."

"I job-hopped a lot, deliberately so, because I was taught that as a black person being complacent would take me nowhere."

Along the way she realised how unfair the world was but was never scared to speak out against injustice aimed at blacks, especially black women.

"At various organisations I questioned why white people with a mere standard six were allowed to progress. I once went for an interview and felt like I was being hired for affirmative action. I insisted they hire me only if they were confident I could do the job, I'm not a token appointment," she says.

Mashego says she joined the EFF because they stood for what she believed in - the Freedom Charter, and that was enough for her to join the movement.

"I left the ANC in 2012 because I felt they lost the plot, I was not going to get involved with any party again but I was persuaded to especially take this position."

Her aim is to increase the party's voters by 1.5 million as well as educate people on why the EFF exists and what they stand for.

"We have the poor at the core of our beliefs. We want to fight for their rights. Equal rights - a model based on socialism and not a capitalist society."

Outspoken and feisty, Mashego's daughter is 24 and she says she never needed a man to feel complete.

"I chose to be a single parent. I am still not married and I never had more children simply because it's rough. My family and friends assisted with co-parenting my daughter," she says.