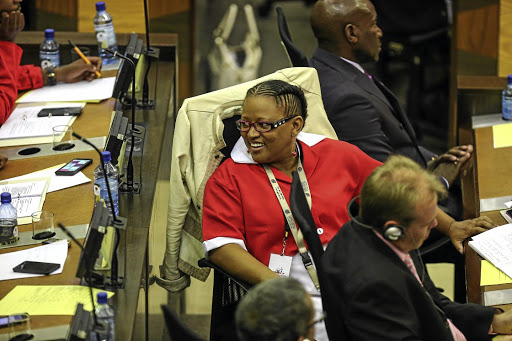 A day after her election as Gauteng EFF chairperson, Mandisa Mashego is already hitting the ground running.

She has set her sights on the 2019 general elections to increase support for the Red Berets in the province.

"We in Gauteng contributed 40% towards the EFF's overall (vote) numbers in 2014. Our aim is to incrementally grow this number and, if possible, triple by converting existing voters on the voters roll who perhaps may not have been persuaded by our arguments in 2014," said Mashego.

EFF leader Julius Malema's vehicle was allegedly pelted with rocks and beer bottles at his party's Gauteng people's assembly in the Vaal on Saturday.
News
3 years ago

The 45-year-old mother of one daughter, said the EFF needed to discuss strategies aimed at consolidating their power base. "That will (be) guided by our ground work, our focus," she said.

"We need to deepen our understanding of what people think the EFF is and also, where possible, apply tactics to help them understand better what the EFF seeks to achieve," she added.

Mashego, who is the first official female chairperson in the EFF, has been acting as the provincial chairperson after Zorro Boshielo resigned from the party in March 2015.

Born in King Williams Town but raised in the rural village of Mayfern, Nelspruit, in Mpumalanga, Mashego holds a B-Tech in Public Relations from the Durban University of Technology.

Mashego, who started her political career in the ANC Youth League in the 1990s, intends to pursue her Masters in Business Administration next year, but admits it won't be easy as it will be an election year.

The bodyguards of EFF leader Julius Malema allegedly fired live rounds at party members who threw bottles at his car when he was leaving a party ...
News
3 years ago
Next Article