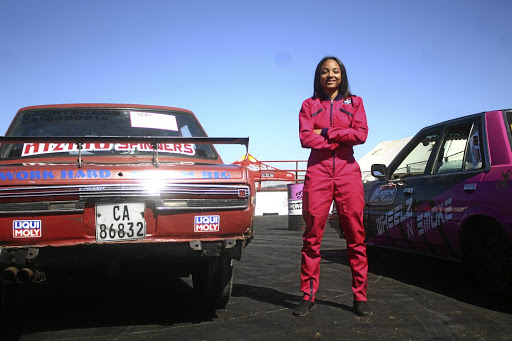 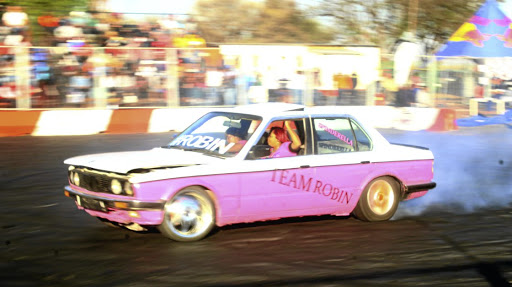 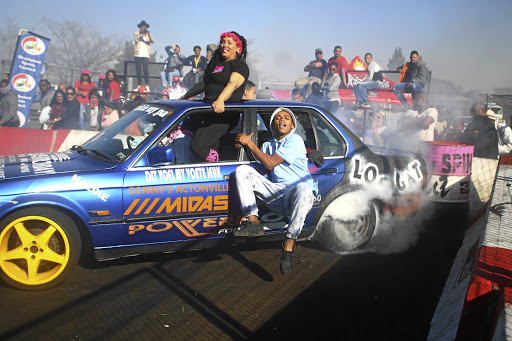 The Spinderella crew are anything but fanciful Cinderellas looking for a Prince Charming to save them.

They have the riding skills that will make most boys weep. This they proved at the first Spinderella fest last Saturday where girls as young as 13 whipped the beastly cars as if it were child's play.

The event celebrating Women's Month was themed Power Under Her Foot to display acrobatics by female drivers.

Ayanda Mbhele, 36, is one of the women behind Wheelz 'n Smoke - a black-owned motorsport company opening doors for women who want to further their skills and excel in the world of drag racing and drifting - which is responsible for the event.

Mbele said the idea for Spinderella came as a result of the excellence portrayed by leading ladies Stacey Lee May, Tina Rossouw and Felicia van Staden, who have been at the forefront of spinning and pushing boundaries in the motorsport.

Although Mbhele has never participated in the sport herself, she is passionate about seeing other women excelling in it.

"We want to encourage more girls and women to take part in this growing extreme sport. I had to dig deep into my pockets to make the event successful as sponsorships didn't come through as we had hoped," she said.

Sounds of punished and blasting tyres kept the crowd screaming for more at the venue in Alberton, Joburg, last Saturday.

The pit filled to the brim with thick white smoke, but the thicker it became, the louder the screams.

Fans looked forward to seeing the queen of drifting, Fatima Hess, show off her tricks. But the 33 year old from Cape Town unfortunately received a call earlier that morning that her mother suffered a heart attack and died. The Spinderella team made a semicircle around her pink Gusheshe to share her pain as they dedicated 30 seconds of silence to Hess's mother.

Robin Ferris, 13, from Northern Cape showed everyone that there is no age limit to doing the best with twisting and turning the car. "I started spinning a long time ago and I love it, I want to continue well into adulthood doing this sport," she said, adding that her older brother taught her the art of performing doughnuts.

Grade 11 pupil Kaylin Oliphant, 17, has been spinning a BMW E30 since the age of 14. "I loved this sport and I did not hesitate joining it. It's a common sport in my community and I got very hooked to it, I wanted to see myself spinning and regardless of how many times I would hit something, I continued trying to perfect my skills."

Her mother said the family didn't have much say on the headstrong Kaylin's decision to join the sport and had to accept it as she was passionate about it.

About 2000 patrons attended the event, including The Queen actor Sthembiso Khoza and Homeground co-presenter Lungile Radu. The ultimate trophy was won by team black which had ferocious spinsters Synovia "Novisto" Smith and Tina Rossouw as part of their crew.

Martin pushes for women and girls not to be left behind in sector.
Good Life
3 years ago
Next Article