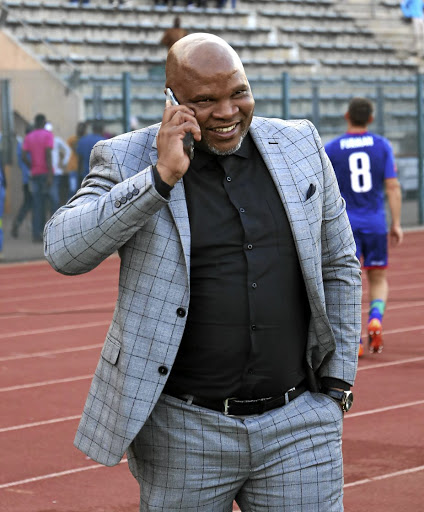 Baroka chair Khurishi Mphahlele has praised interim head coach Vincent Kobola for the job he has done so far and has confidence that he will save the club from being relegated.

Kobola inherited Baroka from Kgoloko Thobejane, with the team bottom of the table with little hope of surviving with four games left in the season. Kobola has overseen three games, picking up two wins and one draw. They have one game left.

Even though the Limpopo side is still bottom of the table, the seven points they have won have boosted their survival hopes. They are now level on 25 points with 15th placed Swallows and within touching distance of TS Galaxy, who are 14th with 27 points.

Given how Kobola has performed, Mphahlele rues the fact they took a long time to decide to appoint him.

“You never know until you try something. This is the first time he became a head coach, he was never a head coach before. So it wasn't easy for us to trust him. Unfortunately, it took us time to trust him,” said Mphahlele.

Their final game of the DStv Premiership season is against Maritzburg United tomorrow at the Harry Gwala Stadium at 3pm. Baroka need a win or a draw to have a chance of beating the drop, and Mphahlele is confident the team will do well and retain their status.

“We are confident. He [Kobola] has built confidence in us and the players. We are confident they will play well,” he said. “We need to play in the DStv Premiership. We have sponsors, supporters and the community we operate [in]; we inspire it. We must continue with the business of inspiring these people.”

Kobola, who will be returning to the Harry Gwala Stadium, is confident of a result. At the back of his mind is also the task of saving the jobs of those who are part of the day-to-day running of the club. “It's a big one, it's D-Day,” said Kobola.

“The boys are ready. You can see the mood has changed. Three games unbeaten, it's changed a lot of things. I'm even confident we can get something from this game.

“What's worrying is the guys that are going to lose their jobs at the office – security guys at the village, the DDC [DStv Diski Challenge] boys – there's a responsibility to save them. That's my concern.”

Should Golden Arrows win their last match against AmaZulu at Moses Mabhida Stadium tomorrow, they will have to wait for the result between SuperSport ...
Sport
1 month ago

Kaizer Chiefs goalkeeper Bruce Bvuma is convinced that even if coach Stuart Baxter had never left, he would still have still reclaimed the No 1 ...
Sport
1 month ago

Orlando Pirates shot-stopper Richard Ofori has made a strong case for why reaching a final is worthless if you won't win it.
Sport
1 month ago

Mamelodi Sundowns co-coach Manqoba Mngqithi has put rivalry aside to send well wishes to Orlando Pirates in their Caf Confederation Cup final against ...
Sport
1 month ago
Next Article