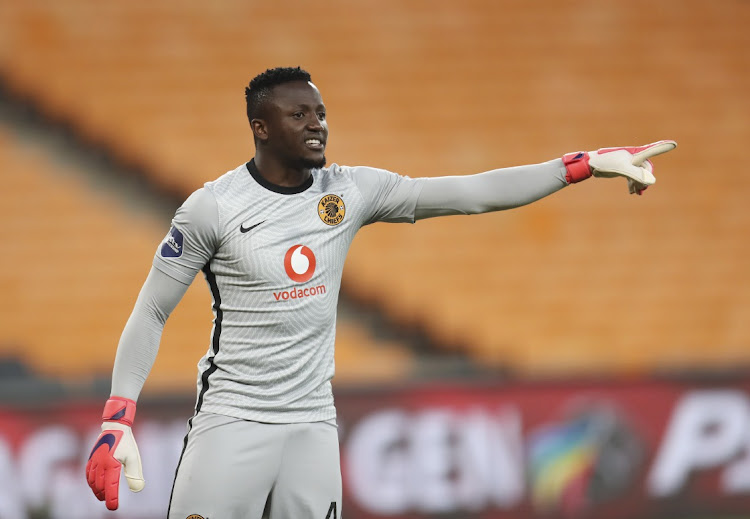 Kaizer Chiefs goalkeeper Bruce Bvuma is convinced that even if coach Stuart Baxter had never left, he would still have still reclaimed the No 1 jersey, saying he returned to the starting XI on merit.

Bvuma is odds-on to start when Chiefs host relegation-threatened Swallows in their last game of the season at FNB Stadium on Saturday at 3pm. The 27-year-old shot-stopper didn't feature much under Baxter but has commanded a spot in the starting line-up since the appointment of coach Arthur Zwane, who mentored him for a long time in the club's youth structures before he was promoted in 2017.

Bvuma is adamant he's not starting games of late because Zwane is doing him favours but because he has been pushing hard at training. He also suggested the three other shot-stoppers, Daniel Akpeyi, Brandon Peterson and Itumeleng Khune, are keeping him on his toes.

“The coaches select players based on training performances. The change in coaching staff didn't change anything for me. I know coach Arthur is giving me a chance to play regularly now but it doesn't mean that if coach Stuart was still here I wasn't going to play. I knew I had to work hard and wait for my chance,” Bvuma said.

“It wasn't easy getting back to the XI. I knew it wasn't going to be easy. If you want to play for Chiefs, you go through challenges. I knew I had to keep on working hard... I mean, we have four No 1s here at Chiefs and I have always told people this whenever I am not playing.”

Bvuma made the cut for Bafana Bafana's preliminary squad to face Morocco and Zimbabwe in Africa Cup of Nations (Afcon) qualifiers next month.

He also hasn't given up on earning a CAF place, wanting Chiefs to beat Swallows at all costs to boost their chances of playing continental football next season. Chiefs would still fail to finish in a CAF spot should Cape Town City and Royal AM win their synchronised games against Stellenbosch and Mamelodi Sundowns respectively.

Royal will still face Orlando Pirates in their last league game next Sunday. “We're looking to use the Swallows game as a step to get back to CAF competitions, whether it's Champions League or Confed Cup. We want to win the game and achieve our own goal and we're not really reading much into Swallows' situation,” noted Bvuma.

Orlando Pirates shot-stopper Richard Ofori has made a strong case for why reaching a final is worthless if you won't win it.
Sport
1 month ago

Making history, not money, main goal for Bucs in final

Mamelodi Sundowns co-coach Manqoba Mngqithi has put rivalry aside to send well wishes to Orlando Pirates in their Caf Confederation Cup final against ...
Sport
1 month ago

Flu and injuries have plunged Kaizer Chiefs into a crisis ahead of their important last match of the DStv Premiership season against ...
Sport
1 month ago
Next Article