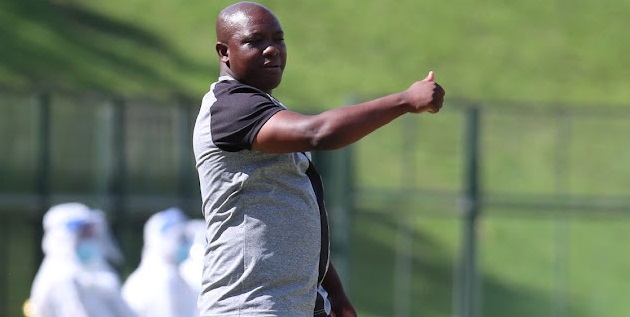 Richards Bay coach Pitso Dladla says they will solely focus on their clash against TS Sporting on Sunday at the Kabokweni Stadium at 3pm.

Dladla's side occupies the top spot in the GladAfrica Championship, followed by the University of Pretoria, who are playing  against Cape Town Spurs at the Athlone Stadium at the same time on Sunday.

With two games left in the season, the Natal Rich Boyz and AmaTuks are level on 50 points, separated by goal difference.

The Richards Bay mentor, though, is insisting his side's focus is on their affairs.

“What we are doing at the moment, we're concentrating a lot on our games. We respect the other club [Tuks], they're behind us on goal difference,” said Dladla.

“The most important thing is not to pay attention to what AmaTuks are doing. We have to control what we can control; if we can't control it, we let it go. We are concentrating on Sunday's game. If you focus on other people's matches you'll end up [not] focusing on yours. We'll just focus on how we play.

“Every game we are playing is for Richards Bay people. The whole club puts the people in front and wants them to have a club in the DStv Premiership,” he said.

Dladla is expecting a tough encounter on Sunday as their opponents are fighting to keep their status in the second tier. TS Sporting are in 15th place and have every chance of beating the drop should they get positive results.

“It's going to be a difficult game because they are fighting for survival and they have established form. The one who wants it more is the one who will win,” said Dladla.

“In this league when you're at the top it doesn't mean you're better than the bottom team, it's just that you had luck during the season, things went your way.  All the clubs have good players.”

Maritzburg United will be looking to build on their famous victory against Royal AM when they visit Stellenbosch in the DStv Premiership match at ...
Sport
2 months ago

As hopeful as he is that he'll save Swallows from relegation, coach Dylan Kerr has narrated how their three remaining matches are difficult in ...
Sport
2 months ago

Mamelodi Sundowns co-coach Manqoba Mngqithi sees some positives from Kaizer Chiefs under interim coach Arthur Zwane and is encouraged with the ...
Sport
2 months ago