Galaxy ground Orlando Pirates to blast away from relegation danger 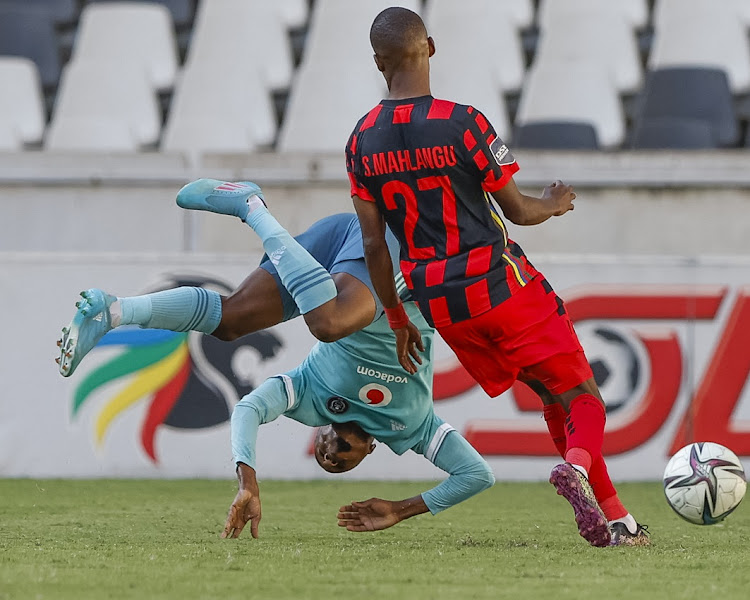 Bandile Shandu of Orlando Pirates takes a tumble in a challenge with Sphiwe Mahlangu of TS Galaxy FC in the DStv Premiership match at Mbombela Stadium in Nelspruit on May 2 2022.
Image: Dirk Kotze/BackpagePix

Lifa Hlongwane scored one of softest goals of the season in the 33rd minute to give the Rockets a win that takes them to 13th in the league on 26 points, eight points above last-placed Baroka FC in the solitary automatic relegation position with three matches remaining.

Baroka have four matches remaining, and 12 points to play for in them, and will look for a win against Lamontville Golden Arrows at Peter Mokaba Stadium on Wednesday to lift their desperate situation.

If Galaxy do survive the chop, and even the second-last position that would condemn them to the promotion-relegation playoffs, they will look back on Monday’s win against the Buccaneers as one of their biggest results achieving that.

For Pirates, the defeat brings despair to their hopes of returning to the Caf Champions next season.

It was also the third Premiership game in a row where the Buccaneers failed to score after barren draws against Baroka and another relegations-threatened outfit, Chippa United.

With 40 points from 27 matches, Pirates remain five points behind second-placed Royal AM (45 from 26), who have played a game less and are looking good to hold on to the runners-up spot and join champions Mamelodi Sundowns as SA’s two representatives in the Champions League.

It is not just Pirates’ target of reaching Africa’s premier club competition that is looking distant. They could also fail to finish third and qualify for the lesser Caf Confederation Cup as they remain four points behind third-placed Cape Town City, who also have a game in hand.

Pirates were the stronger team out of the blocks and dominated the first half but, as has been their trait for much of the 2021-22 campaign, their dominance did not translate into goals.

Galaxy adopted a cautious approach and looked to hit Pirates on the counter. They got their reward when Lindokuhle Mbatha toyed with Bucs captain Happy Jele before pulling the ball back for Hlongwane to easily tap into an empty net.

Pirates intensified their tempo in the second half and put Galaxy under sustained pressure with several attempts at goal, mostly wide or too close to goalkeeper Lloyd Kazapua when on target.

Galaxy will travel to the Mother City to play Cape Town City in their next match on Saturday.

Pirates travel to Benghazi in Libya for the first leg of their Confederation Cup semifinal against Al Ahli Tripoli on Sunday.

Cosmos staring down the barrel of relegation to amateur league

Jomo Cosmos could be facing relegation.
Sport
2 months ago
Next Article