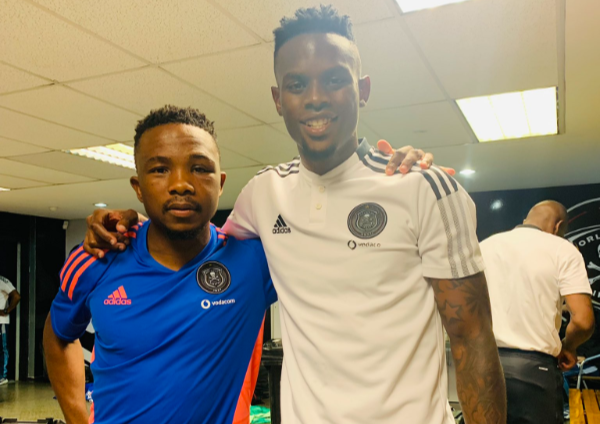 Innocent Maela posted a picture of himself and Orlando Pirates teammate Paseka Mako AT Orlando Stadium on April 24 2022 after Bucs beat Simba on penalties to advance to the semi-finals of the Caf Confederation Cup.
Image: @Decocr7Maela/Twitter

Orlando Pirates are likely to play the remainder of their season without injured influential left-back Paseka Mako.

Pirates co-coach Mandla Ncikazi said 28-year-old Mako is recovering from a scary injury he sustained in the Buccaneers’ last Premiership match, their 0-0 draw against Baroka FC in the left-back's hometown of Polokwane last week.

“He is recovering. God is good. It could have been worse. But I don’t think we will see him [play] again this season," Ncikazi said.

“I’m just happy that he is alive and healthy and will play football again.”

Mako has been a standout player for Pirates this season, having featured in 33 matches in all competitions before the injury that left him unconscious on the field at Peter Mokaba Stadium.

Bucs will have to do without his reliable services in their five remaining Premiership matches, the two-legged Caf Confederation Cup semifinal and potentially the final.

Mako was at Orlando Stadium for the game against Ximba and went to greet the Ghost, as the Pirates fans are known, after the match, enjoying a few minutes of their adoration.

Ncikazi said he had extended a father figure role to his player as Mako had slept at the coach's house the night before the match against Simba. “He even slept at my place because he visited me.”

This victory belongs to you my boy 🙏🏽👊🏽🙇🏾‍♂️ pic.twitter.com/pOZGpifzj5

Mako has received well-wishes from the football community countrywide. The player was visited in hospital by TS Galaxy coach Sead Ramović, his fellow coaching staff and players on Good Friday.

PSL players and coaches have sent their best wishes to Mako.

Mako’s injury is a blow to his hopes of a call-up for Bafana Bafana’s start of the qualifying campaign for the 2023 Africa Cup of Nations in June, as his experience gained in Pirates' Confed Cup run could have come in handy for Hugo Broos’ team.