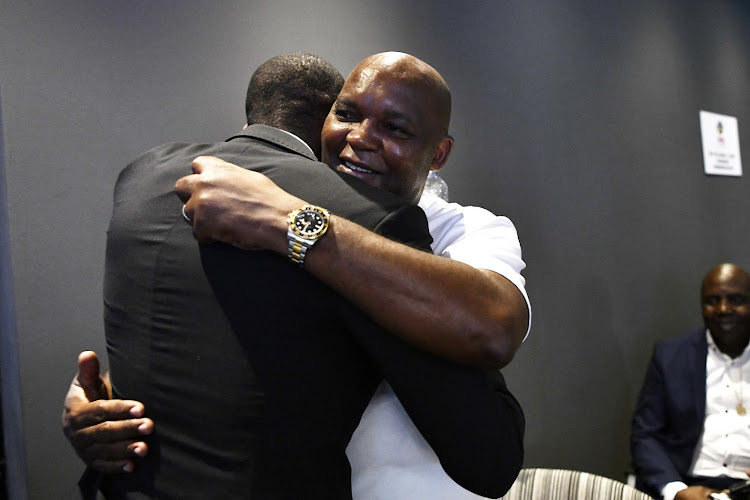 Mamelodi Sundowns coach Pitso Mosimane is delighted to have Rulani Mokwena back with the team.
Image: Lefty Shivambu/Gallo Images

Pitso Mosimane said he was receiving an "improved” Rulani Mokwena as the Mamelodi Sundowns prodigal assistant coach took his place at the team’s training camp in Rustenburg on Friday.

Sundowns are training at Royal Marang Hotel’s excellent sports centre in anticipation of the return of the 2019-2020 Absa Premiership – probably this month – from its mid-March suspension due to Covid-19.

"Why him?  It’s because of the value he adds, because he started his career here. He’d been here for so many years.

“Of course he did move on, like anybody else. I have also moved on [in my career].

“We are all coaches. We are ambitious. You want to see ‘what’s in it for me’, and you will try and test yourself. Why not?

“He’s very brave as a young coach to move, explore and see what’s in it for him. It’s not many coaches who can do that. He did, which is good.

“He was a head coach, so the mental side, the character becomes different. And he had his own challenges and successes.

“He comes back a much better coach in terms of his experience now. He has seen things, he has coached as a head coach, he has moved on.

Mosimane he will fit back quickly and smoothly because he understands the culture of Sundowns,

“The good thing is you don't tell him ‘this is how we play'. We have never changed the way we play.

“When he left, he left with a classified book. And he has brought it back.

“Now we need to edit and upgrade the book. He catches up quickly because he’s intelligent.”

After being part of Sundowns' 2016 Caf Champions League-winning technical staff, Mokwena joined Orlando Pirates as an assistant in August 2017, and this season served a spell as caretaker-coach there before being loaned for a game as head coach of Chippa United in March.  The 33-year-old coaching prodigy was released by Chippa and Pirates last month.

The Premiership and Nedbank Cup semifinals will be completed in a single city, biologically safe environment behind closed doors, the details of which are being ironed out by the Premier Soccer League and SA Football Association.

Rulani Mokwena is set to make a sensational return to Mamelodi Sundowns and the Pretoria club will make the announcement in the coming days.
Sport
1 year ago
Next Article