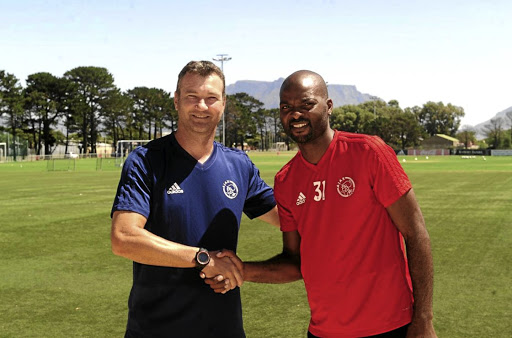 New Ajax Cape Town defender Rooi Mahamutsa has promised to repay the faith shown in him by the club by helping them win the GladAfrica Championship title.

The ex-Orlando Pirates defender was unveiled as the club's new signing yesterday as they look to win the title and qualify for the Absa Premiership next season.

Mahamutsa joined Ajax on a short-term deal until the end of the season and will be desperate to impress the technical team during his stay.

"To the Ajax faithful, I am looking forward to wearing your treasured red and white kit and I will fight for this title as if I came through your academy," Mahamutsa told the Ajax website.

The 38-year-old has been without a club since he left Free State Stars when they were relegated last season. He had unsuccessful trials with Baberwa in the ABC Motsepe League. He was also linked with moves to Polokwane City and Black Leopards during the January transfer window but it didn't work out.

Peter Shalulile is lately becoming a saviour for Highlands Park when the Lions of the North appear to be in dire need of someone to pull them out of ...
Sport
2 years ago

"The world works in a strange way, I've always admired Ajax as a club and as a brand for many years. At my age, you wouldn't think that I would have the honour of working with the best academy in Africa but here I am," the veteran defender said.

The Urban Warriors are sitting pretty on the summit of GladAfrica Championship with 42 points from 21 matches, five ahead of second-place Uthongathi.

They will hope Mahamutsa's experience will come to the fore as they look to maintain their lead at the top with nine matches remaining until the end of the season.

The Mpumalanga-born defender will bring a wealth of experience having spent eight years with Pirates where he won the back-to-back treble.

He also helped Ea Lla Koto to lift the Nedbank Cup two years ago before they were relegated last season.