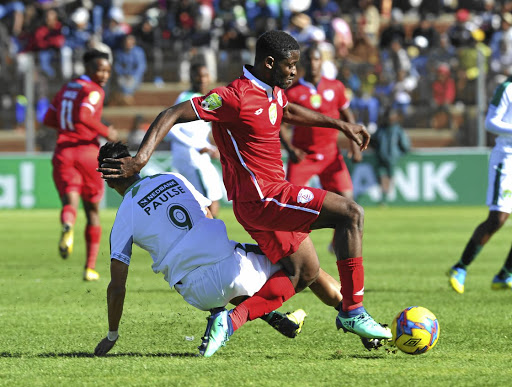 Despite succumbing to Free State Stars' pressure and losing 2-1 on Sunday, most of this year's Nedbank Ke Yona team players served as a reminder that SA has talent.

A late goal by veteran striker Eleazar Rodgers broke the hearts of the Ke Yona team and prolonged their frustration as they've never won this match in the past six editions now. It is a match staged between Nedbank Cup winners and a select squad made up of amateurs.

Stars broke the deadlock barely five minutes into the match through Yusuf Jappie but Lunathi Mdatyulwa immediately pulled one back for the Ke Yona outfit.

Powered by a cheerful crowd who braved the cold Sunday afternoon, the Ke Yona team looked competent, from their goalkeeper Thabo Mogotsi to their speedy striker Cameron Paulse, a typical No9. The fringe Stars central defensive pairing of Keita Bangaly and Tshepo Tema could not deal with the speedy Ke Yona attack, spearheaded by Paulse and Mdatyulwa.

After putting in a man of the match display, Mdatyulwa, 21, expressed his optimism that his performance on the day might have caught the eye of some top-flight clubs.

"I am very proud of my performance today. I am optimistic that I may have done enough to be given a chance in the Premiership. This is just a start for me," said Mdatyulwa, who hails fro from Tarkstad in the Eastern Cape.

The Ke Yona players will now be drafted into Premiership teams for trials.