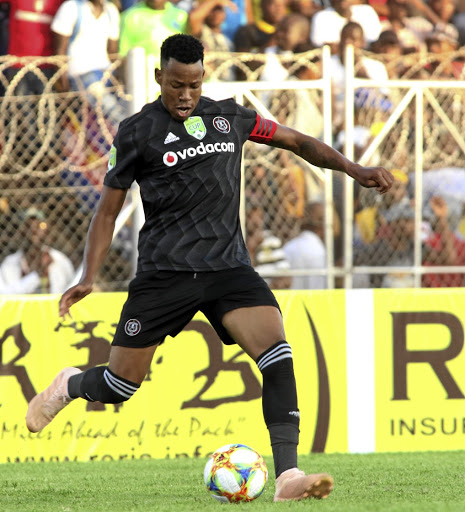 Happy Jele of Orlando Pirates is the only active surviving member of the team that lost to Al Ahly in the 2013 final of CAF Champions League.
Image: Antonio Muchave

As Orlando Pirates prepare to take on Esperance in the CAF Champions League, former coach Roger de Sa has advised the Buccaneers to "kill them with quickness".

The Sea Robbers have a tough assignment against the defending champions of the competition in Group B in an empty Stade Olympique de Radès this afternoon (3pm).

With three games left in the group phase, the standings remain tight with Bucs and Esperance both on five points and Horoya (Guinea) on four points, with FC Platinum (Zimbabwe) having one.

"I always feel that speed would hurt them because we cannot compete [with them] physically and mentally. So I think they (Pirates) should play at a high-tempo and beat them with their pace," De Sa said.

"Tactically, they (Esperance) are disciplined in the way they go about their game and have some good players.

"Due to their close proximity to Europe, they are very much influenced by the Italian style of play, and that makes for one difficult team to beat."

As Orlando Pirates coach back in 2013, De Sa had some bruising battles with the Tunisians in the competition.

It was Esperance who stood in the way of a final berth that year, but Bucs advanced through a 1-1 aggregate away goal win in the semifinal.

Pirates skipper Happy Jele is the only surviving member of that team that lost to Al Ahly in the final who is playing regularly.

De Sa said the performance of leading players like Jele would set the tone. "I was blessed to have quality leaders in the team like Happy, Senzo Meyiwa, Oupa Manyisa, Andile Jali and Rooi Mahamutsa, who were outstanding."

Jali was suspended for the second semifinal leg but travelled to Tunis anyway to see Mahamutsa head in the all-important away goal.

"You need these cool heads because the Tunisians can intimidate and frustrate you.

"They know how to kill the clock and kill the game and influence the referee. Maybe that's where we come short because they know the mental side of the game," De Sa said.